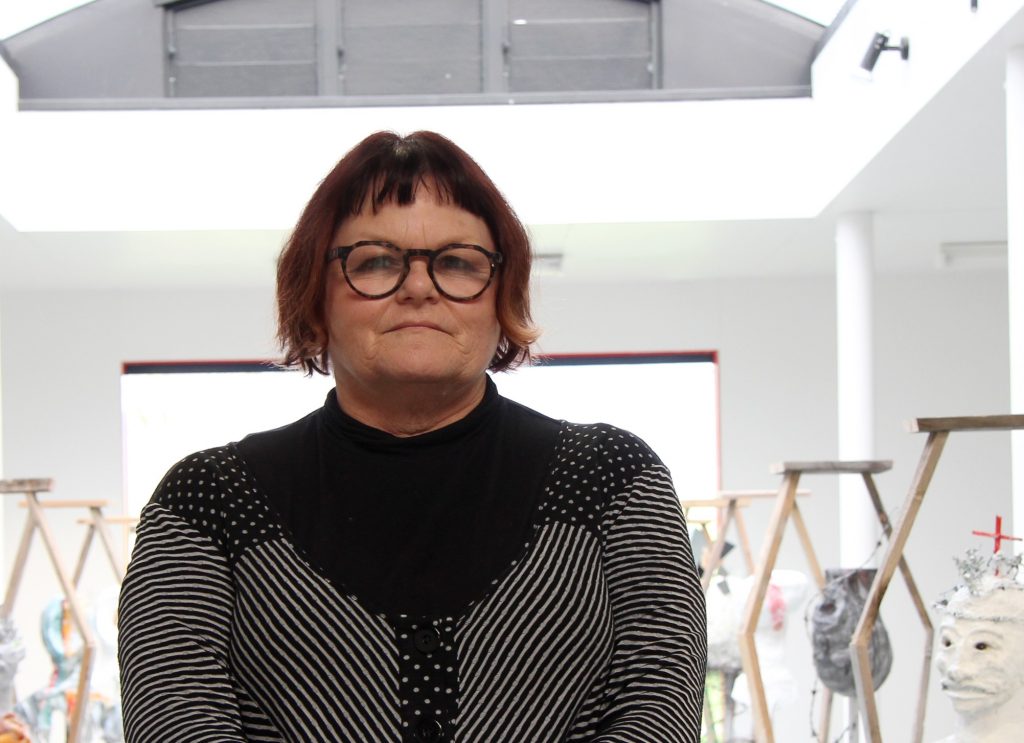 Depicting combatant trauma began as a personal journey for artist Gilly Marshall, the granddaughter of the last New Zealand World War 1 veteran “still standing”. Studying at EIT, Gilly chose “The Invisible Wounds of Warfare” as the topic for her Master of Professional Creative Practice – Te Hono ki Toi (Poutiriao). Her multi-media installation, featuring 12 characters backed by coffin-like frames, was part of the recent master students’ final exhibition 1 in four, 4 four in one staged at Ideaschool. Gilly says the starting inspiration for her journey into PTSD was her grandfathers and a cousin, all of whom fought in wars. Her paternal grandfather Bright Williams was a war hero, awarded the Croix de Chevalier de la Légion d’Honneur.  Bright died in 2003, just a fortnight short of his 106th birthday – the last of more than 100,000 New Zealanders who served in the First World War. However, her installation more generally reflects the trauma experienced by all soldiers of warfare – World War 1, World War 11 and the Vietnam War. “The characters represent different ways of looking at brain trauma,” she says, “revealing what’s going on inside their heads.” After leaving school, Gilly worked in retail, but she resolved to pursue art studies when she was made redundant. “Once I stopped crying and got myself together, I started an introductory course at EIT.  I stayed another five years.” After progressing to a Bachelor of Visual Arts and Design, Gilly studied on campus for her graduate diploma in teaching.  While teaching technology at Tamatea High School, she has added the EIT honours and master’s degrees in creative practice to her string of qualifications over the last 1½ years. “I may go on to do a doctorate,” she says, “but I’m taking a break from study for now.  I love how research builds up my ideas, so it would have to be something to do with research. “Study is a way of living really, you’ve got to have something in front of you to keep gaining and going forward.” Gilly has loved studying at Ideaschool, enjoying meeting people of all ages and from diverse backgrounds. “I will come back to Ideaschool.  I will try to get a job here,” she laughs.  “I love talking to the students, and the lecturers are just amazing – they are just so supportive.  As a student, I crashed and burned a few times and they picked me up and gave me alternatives.” EIT’s study programmes have been a good platform, she says, allowing her to express herself. “I love commentary art.  The best art is art you can reflect on.” Photo: Gilly Marshall with her multi-media art installation. Posted: 5 August 2018