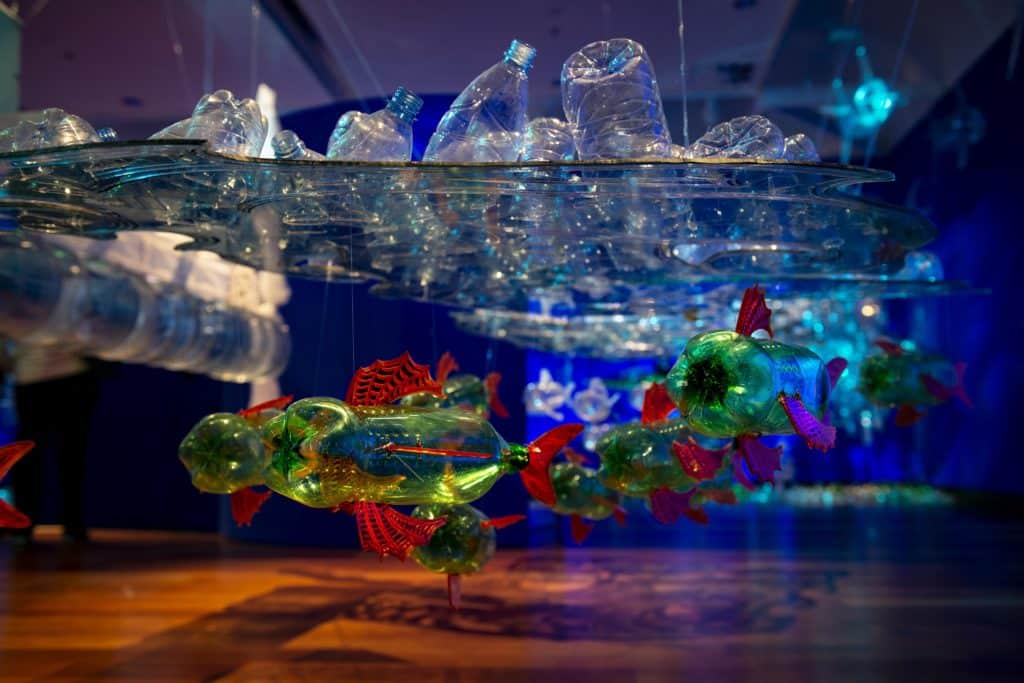 Two of Hawke’s Bay’s top designers have been recognised by the Designers Institute of New Zealand, picking up Golds at the Best Design Awards.

George Nuku and David Trubridge were both recognised at the DINZ Best Design Awards which were held on Friday at Spark Arena, Auckland.

Being held for the 21st consecutive year, the Best Awards is the largest design awards programme in the Southern Hemisphere.

This year’s awards attracted over 1200 entries from New Zealand and Australia, across nine individual categories of design.

Nuku was awarded a coveted Gold Pin in the Spatial: Exhibition and Temporary Structures category for his Bottled Ocean 2118 exhibition at the MTG. The work, which involved the creative collaboration of more than 1700 school students, 10 different school groups and members of the public, envisaged a world in which the globe is covered in ocean, using plastic as a medium of telling an important environmental message.

His work was incredibly well received by visitors; their sentiments of amazement were reflected in the judges’ comments:

“We never expected we could be so moved by a polycarbonate wharenui. A powerful comment on the state of our planet and human intervention,” judges said.

“Each delicately detailed object within the exhibition contributes to an overwhelming exhibit that teaches and inspires a better way for the next generation.”

Trubridge, who was awarded the John Britten Black Pin by the Institute for his outstanding leadership, vision and achievement back in 2007, picked up two further Gold Pins this year.

The first of these might be considered somewhat expected, given that it was for a light – a medium for which the studio is already well celebrated.

Trubridge says the Maru Light’s circular form is inspired by diatoms, which are at the base of the entire oceanic food chain.

The name Maru is found in both the Maori and Japanese language, referencing the cycle of life with $50 from the sale of each light donated to the Ocean Recovery Alliance.

The second gold rewards a packaging, or rather un-packaging experience, designed in collaboration with Think Packaging for Steens 27+ UMF Manuka honey with a price point of over $1800.

“To capture the exclusivity of the product we designed and crafted a bespoke, bold, kinetic and interactive unboxing experience that leads the consumer through a unique journey,” Trubridge said.

This journey was one fully appreciated by the Awards judges.

“The Manuka Honey contents of this creatively conceived structural package is worth almost as much as gold,” judges said.

“The novelty of the kinetic unwrapping experience delights with its iconic, aesthetic references to Kiwi beehives, make for a winning combination.”