Lots On At MTG Hawke’s Bay Over Summer 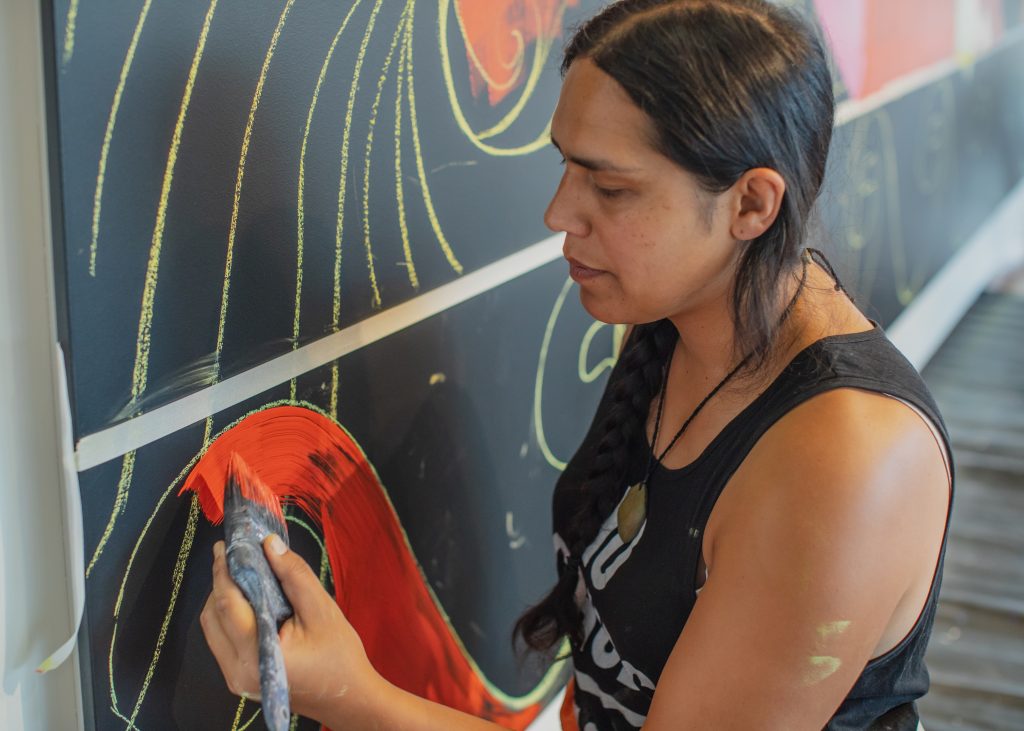 A vibrant new mural, a thought-provoking public talk and an interactive display of historical plans are part of several exciting new exhibitions at MTG Hawke’s Bay over the coming months. Gisborne artist Taupuruariki (Ariki) Brightwell is painting a mural in the main entrance foyer this week. Her design depicts the god of rainbows, Uenuku, and ancestors special to Ngāti Kahungunu, including the chief the iwi takes its name from. The creation of the mural, titled Te Aniwaniwa Nui, coincides with the national Hui Takatāpui 2018 being held in Hastings (Friday 23 November to Sunday 25 November) as well as a new exhibition, FAFSWAG: code switch. This features artworks of three members of the South Auckland-based FAFSWAG Arts Collective. FAFSWAG’s creative work has its roots in producing vogue balls: competitive events of dance, fashion and performance that celebrate queer brown bodies. This underground Auckland ballroom scene has grown rapidly from its 2013 beginnings in an Otara community hall, spreading into an array of venues in central Auckland and beyond. Code-switching is the practice of modifying expression, such as language, behaviour and appearance, to adapt to different sociocultural norms. Artists Jermaine Dean, Akashi Fisi’inaua and Walters Prize nominee Pati Solomona Tyrell each work across a range of performative and photographic art forms, with a common relationship to communities of indigenous Moana heritage and diverse genders and sexualities. A public discussion, led by these three artists, takes place at 11am on Saturday 24 November, at the MTG Century Theatre. Everyone is welcome to attend this free event. Another exhibition set to open soon is The Architectural Legacy of J.A. Louis Hay, which showcases 21 original plans by the renowned Napier architect. In addition, more than 120 plans provide an interactive element to the exhibition, with a touch screen that allows people to expand each plan and explore their detail. A map of Louis Hay-designed buildings has also been developed, so visitors can literally follow in Louis Hay’s footsteps and discover his legacy first-hand. Also opening in December is a display dedicated to Te Tiriti o Waitangi, a collaboration between museum curators, educators and librarians. Based in the Octagon cases located in the temporary home of Napier Library, the four-part display provides insight into He Whakaputanga, the Declaration of Independence of 1835, the treaty itself, local stories, and a timeline of significant legislation and relevant events since 1840. “It’s timely to develop a display on Te Tiriti o Waitangi to be ready for the lead up to Waitangi Day next year,” says MTG Hawke’s Bay’s Director Laura Vodanovich. “Next year marks 250 years since the first encounters between Māori and Europeans. Hawke’s Bay has a rich and diverse culture and the range of exhibitions being developed give visitors a glimpse of the stories, talents and heritage within this community, and provides opportunities for discussion about the future.” New exhibitions, events and displays means others must end, and this Sunday (25 November) is the very last day to view the Steadfast Steamers: Models of Hawke’s Bay Shipping exhibition. It features impressive scale models of 19th century Hawke’s Bay steamers created by shipbuilders to show prospective buyers how the full-sized steamer would appear. Today they are all that remains of these ships so be sure to see them while they are still on show. Other exhibitions which have been very popular, and will continue through to early next year, are Nyree Dawn Porter – From Local Stage to Global Stardom, and George Nuku: Bottled Ocean 2118. Photo: Taupuruariki Brightwell at work on Te Aniwaniwa Nui. Posted: 23 November 2018