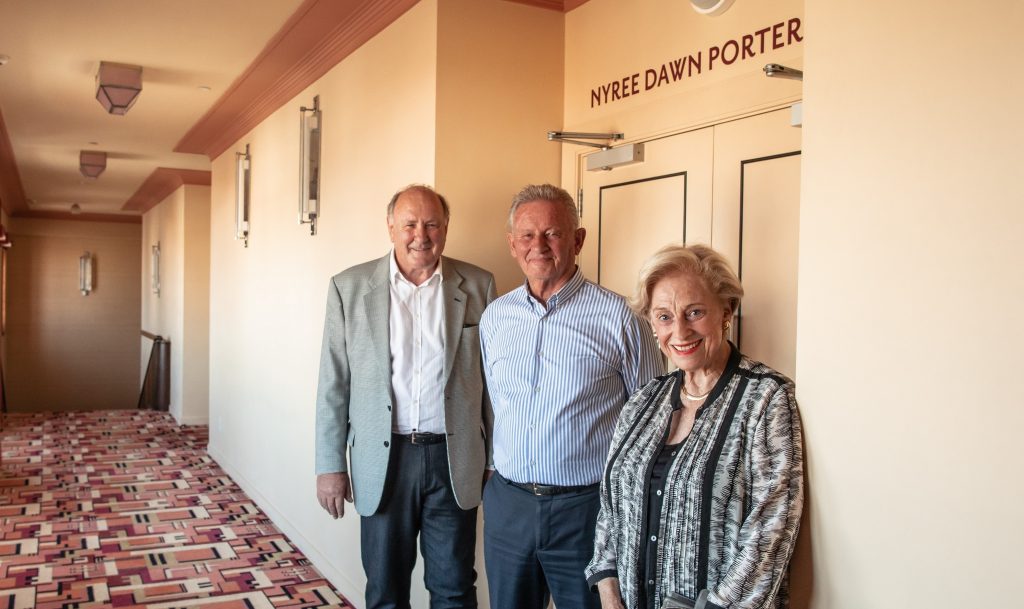 A “beautiful spirit” who went on to achieve worldwide fame has now had a little piece of her hometown named after her. The Nyree Dawn Porter Dress Circle was officially unveiled at the Napier Municipal Theatre earlier this month. The ballet teacher, dancer and actress achieved worldwide fame in the BBC production of The Forsyte Saga. An MTG Hawke’s Bay exhibition about her life and career, Nyree Dawn Porter: From Local Stage to Global Stardom, resonated with locals as well as national and international visitors young and old alike. Its popularity led to it being extended by six months, through to the end of January this year. Among the family members, old school chums and others who gathered for the opening was Nyree’s lifelong best friend Glenys Granger. “Nyree was absolutely a beautiful spirit which she never lost. She never criticised people, always finding a redeeming feature when no one else would. She was a beautiful friend.” She recounted stories from Nyree’s early days, such as collaborating together on choreography, seeing movies at the now demolished Gaiety Theatre, and many days and nights spent at the Municipal Theatre, particularly for Easter Competitions. “An adjudicator said this girl has a gift from God and she was, she spoke through her dance,” said Glenys, recalling that at 16 Nyree became the youngest ballet dancer at that time to receive her Solo Seal. There were also a few tales from their shared London days, including that she changed the spelling of her first name on the advice of her agent, who thought no one would know how to pronounce it, and a mention of the first stage production she appeared in, a Peter Pan pantomime, with Vanessa Redgrave. Napier City Council worked with Nyree’s family on the installation of the new signage. The story of her life and achievements will be displayed in the Pan Pac foyer for the next three months. Nyree’s brother Bob Johnstone talked of Nyree performing in Napier Operatic Society shows, and touring nationally with New Zealand Player productions. “This all began with an article I found in a Council magazine from 1974. In it there were two pages of claims to fame by five Napier people. Four of the five had places named after them, she didn’t, so I decided to do something about it.” Among Nyree’s highlights, he said, was receiving an OBE for services to TV and film, being invited to attend dinner at 10 Downing St at the request of astronaut Neil Armstrong, and having her daughter Tassy. “Nyree had grit and determination and I think that’s what got her through. I think she would have been thrilled with this tribute to her life.” Napier Mayor Bill Dalton, who knew both Nyree’s brothers, described her as one of Napier’s brightest stars. “As visitors to the exhibition would have seen she was much more than just an actress. It has raised her profile in the community. People may not have known of her work before, but will recognise the symbolism now when they visit this theatre. She has been and will always remain a shining light in Napier.” As a teenager in the 1950s, Nyree inspired her ballet students by painting graceful dancers directly onto the walls of her Napier home, where she held lessons. Her performing talents won her the Miss Cinema competition, which led to a trip to London for a screen test. After making her mark in the UK theatre scene, she became a television star in The Forsyte Saga, watched by millions around the world. Later in her career, she was the subject of a This is Your Life episode in England. Unfortunately, this was never shown in New Zealand. She never returned to NZ to live and continued performing right up until her unexpected death in 2001. She would have turned 82 at the end of last month. Visit the MTG Hawke’s Bay website for a behind the scenes video, including an interview with Melanie and David Oliver, who owned Nyree’s Napier home at one time, describing how Nyree’s paintings were discovered, removed and conserved Photo: Nyree Dawn Porter’s siblings John Porter, from Tauranga, Bob Johnston, Napier, and her best friend Glenys Granger, now based in Sydney, at the official opening of the Nyree Dawn Porter Dress Circle. Posted: 12 February 2019