Through Our Lens II 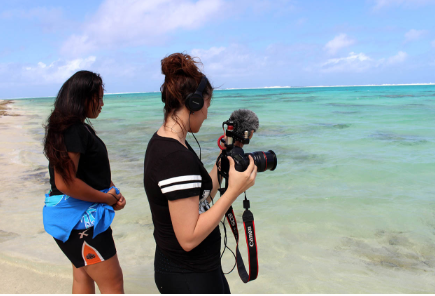 The Māoriland Charitable Trust (MCT) is looking for our Māori filmmakers of the future. From September 2018 THROUGH OUR LENS II will travel up to 16 Māori rangatahi filmmakers to the Pacific and Indonesia to participate in filmmaking workshops. Through Our Lens is a kaupapa that takes Māori rangatahi filmmakers to the world. In 2017, the inaugural Through Our Lens saw 14 rangatahi filmmakers aged 13 – 24 selected to travel to Samoa, Hawai’i, Rarotonga and Tahiti to work with Indigenous youth to tell film stories. These workshops provided an opportunity for rangatahi Māori to hone their leadership abilities and to share their skills and culture with other young people throughout Te Moananui a Kiwa. They also created new connections and future opportunities. The fourteen rangatahi Māori film leaders worked with forty-seven other youth in four countries. Together they created nine short films from a youth perspective. The films tell stories of identity, the effects of colonisation and challenges they face from the perspective of the communities that they were born in. These films premiered at Māoriland Film Festival March 2018 to much acclaim from audiences, filmmakers, educators and international film festival directors who are interested in both screening the films and bringing the initiative to their communities. THROUGH OUR LENS II will select up to 16 rangatahi aged 14 – 24 to travel to an Island in the Pacific or to Indonesia for a filmmaking workshop where they will work with local rangatahi to produce short films. Applications will be open nationwide for Māori filmmakers aged 14 – 24 via an online form. Rangatahi will need to answer questions and submit a video to apply. A long list of 24 rangatahi will be selected to attend a 2-day workshop at the Māoriland Hub in Ōtaki from 8th-9th September. At this workshop, participants will be mentored through a series of challenges by Māori filmmakers to see if they have the goods to be a Māoriland Through Our Lens rangatahi film leader. Applications close 20th AUGUST 2018 Website: http://maorilandfilm.co.nz/through-our-lens/ Application form: http://bit.ly/throughourlenstwo Posted: 7 August 2018