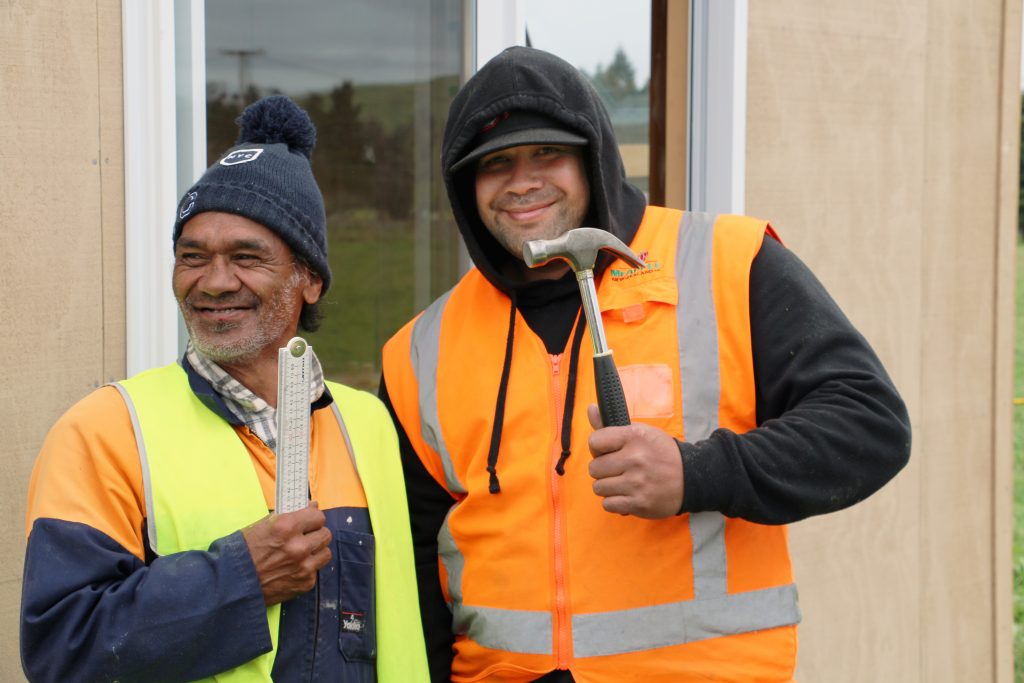 Take ten people all new to building. Introduce them to power tools and basic building knowledge. The result is new skills and a new lease on life. With ages ranging from 17 to over 70, the mainly Takapau locals are working with EIT tutor Mike Chapman on a 14 week building introductory national certificate. It is the first time EIT has run a programme in the township, although the same course has been available in Waipukurau for the past five years. Together the students have produced a playhouse, outdoor BBQ tables, saw horses and, most recently, are building a 10 square metre cabin in a paddock in the heart of Takapau adjacent to the RSA. The non-consent building has caused a stir in the local community with ‘orders’ placed for two more by locals. The group includes a mother and son, and a father and daughter, with the younger members helping out on the theory side and their elders sharing the wisdom of life experience. There’s a retired school principal, a retired school teacher, a former production manager, horticulture workers and some who fit their freezing works jobs around the three day a week programme. Most are wanting to gain experience to do odd jobs to help out whānau but others have an eye to longer term aspirations. Taranaki Nepe Apatu is keen to move to the next level and undertake a Level 3 certificate in construction trade skills, carpentry. Mike believes that Taranaki has what it takes to succeed in the building industry and is looking for an apprenticeship opportunity for him. “I only have to tell him how to do something once and he’s got it. He’s so keen to learn, never misses a day, and is always willing to help the others. I can really recommend him.” EIT is looking to run a Level 3 Carpentry programme at the Waipukurau campus in 2019 providing there are sufficient enrolments. Students will construct a two-bedroom transportable home throughout the year. Tony Maaka, known to one and all as Little Man, is “very proud” of the work the team has produced. His daughter Teresa is working alongside him and he’s enjoying that. From a farming background, Little Man has worked with building tools before – “who on a farm hasn’t but this is giving me much better skills”, he says. He’s thinking he might build another cabin on land further up the East Coast one day but in the meantime, he’s keen to do work around the community. Along with three others from the team, he created vegetable planter gardens for Takapau School and is chuffed to have them described as “terrific” by the school staff. “It would be good if we could do odd jobs out in the community,” he says. Photo: Tony Maaka (left) and Taranaki Nepe Apatu are keen to take their skills further after a 14-week introductory building programme offered in Takapau by EIT. Posted: 29 September 2018