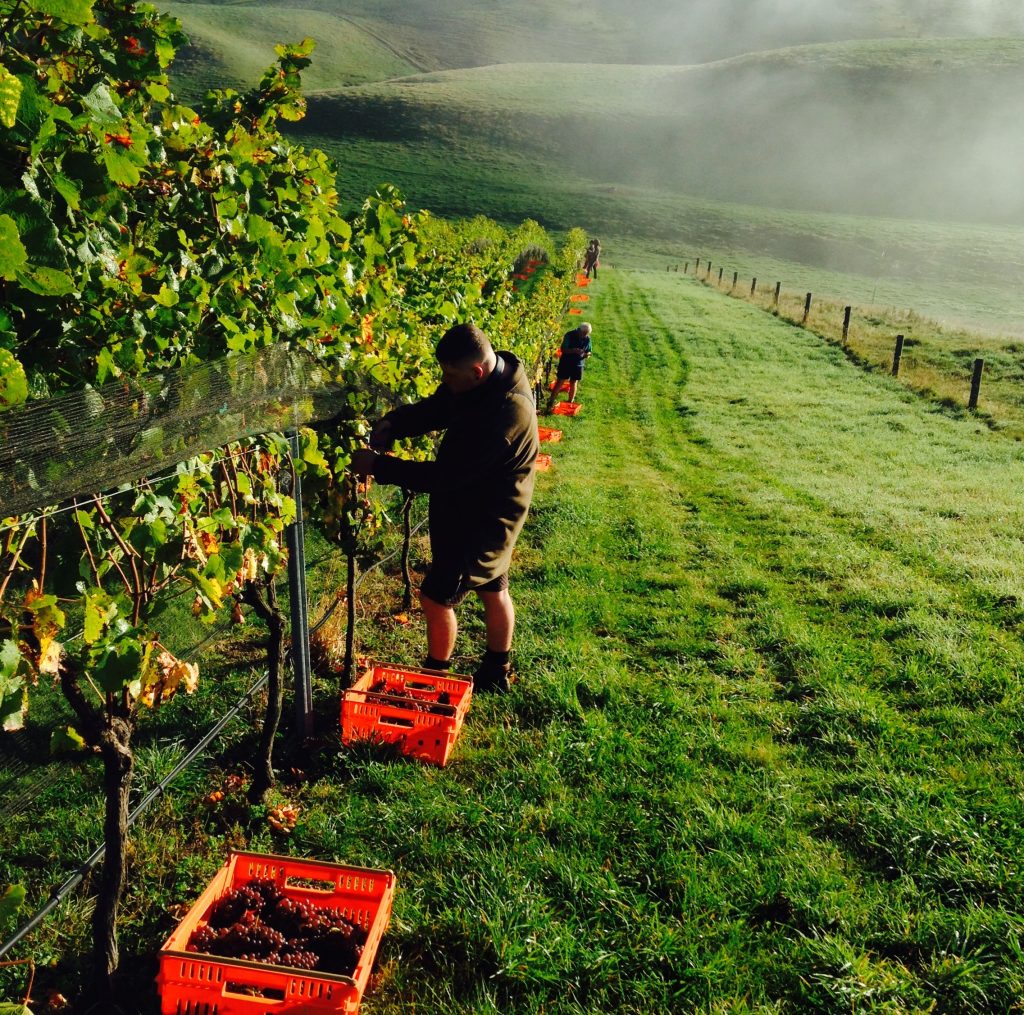 Have you heard the story about the Kiwi winemaker and the Australian ecologist who fell in love after meeting at a South Australian pub? Well, it’s a story of hard work, keen intelligence, love of the land and the craft of winemaking… it’s the Lime Rock Wines story. Rosie Butler was studying to be a winemaker at the prestigious Roseworthy College, north of Adelaide when she met fellow student, ecologist Rodger Tynan at the local pub. So began a partnership which eventually led them back to Rosie’s family farm on Tikokino Rd, 6km from Waipawa in Central Hawke’s Bay, and the establishment of Lime Rock Wines. That was after she had gained practical experience in Gisborne with her college sponsor Montana Wines (now Brancott Estate), and he had finished camping around outback South Australia studying the effects of sheep and cattle grazing on flora and fauna throughout the state’s 408,000 square kilometres of pastoral leasehold lands*. “You can only take so much heat, flies and dust,” Rodger drolly says of his 18 years with the South Australian National Parks and Wildlife Service. It was in 2001 the couple started on their winery dream by buying 19 hectares of family land, in association with Rosie’s two brothers, Peter and Warwick, starting with a bare paddock. The following year hand-planting of the vines began on the north-facing limestone slopes between 240 and 270 metres above sea level, and continued for four years using Rodger’s home-built water jet to drill the soil. It was an early indicator of his desire to work with the soil rather than intervene, an attitude which was fashioned by his observation of the negative effects land cultivation had on the outback, and which extends even to the weeds and native insects that inhabit the vineyard. “We planted all the vines using water pressure – a small hole and a touch of fertiliser,” he says. “We are ecologically-based and from the start have been part of Sustainable Wines NZ.” The first hand-picked vintage was in 2004, and today the vineyard includes 9 hectares of planted vines, with another hectare ready to be planted. Interestingly there is no Chardonnay, the couple having planted Pinot Gris, Sauvignon Blanc, Merlot, Cabernet Franc, Grüner Veltliner and Pinot Noir, the latter proving remarkably successful. Among their successes are the trophy for their 2008 Pinot Noir at the 2011 Australian Boutique Wine Awards, Gold at the Melbourne International Wine Competition in 2016 for Lime Rock Kota Pinot Noir 2010, and the trophy for Champion Premium Varietal at the Hawke’s Bay A&P Bayley’s Wine Show with their Lime Rock Grüner Veltliner 2016. Further prestige was added by the world’s top wine critic Jancis Robinson who included Lime Rock Pinot Noir 2009 in her “Top 100 Red Wines” list for 2012 – out of 10,000 wines tasted from around the world that year. “Mainly concentrating on Pinot Noir we’re a bit of an oddball for Hawke’s Bay,” Rodger says. “However the conditions are ideal for growing – 270 metres above sea level it’s cooler but we don’t get frosts, and Pinot Noir is the most suited varietal to limestone.” Of course, growing the grapes is only part of the business equation. The wine is made at Hawke’s Bay Wine Company in Napier, with Rosie keeping a close eye on every step, then bottled at WineWorks in Hastings. Then there’s the cellar door on weekends, and the continual marketing. Currently Lime Rock Wines sells around 70 percent of its wine offshore with markets in Singapore, Japan, China, Australia, USA and through two distributors in the UK, including Majestic Wine, the territory’s largest retailer with around 200 stores. It’s been a busy lifestyle for the couple who are both past retirement age, and Rosie and Rodger are now looking to sell the business. “It’s been hard work, but the next person that comes in will benefit from all that hard work we’ve put in,” Rodger says. “The vineyard’s a going concern and there’s room to develop it more… maybe even plant Chardonnay. “The soils are really good, we don’t have virus problems and the small amount of water that is needed is supplied to the vines from a consented bore and applied via drip irrigation. “The cellar door could go to a new level. It depends on the ambition of the buyer. “It’s a beautiful site with fantastic views, and while we live in Waipawa there are potential house sites on the vineyard.” In short it’s an ecologically-based, quirky, award-winning, boutique winery sited in an idyllic spot, and built by a hard-working, intelligent, earthy trans-Tasman partnership. *New Zealand is 268,000 square kilometres Posted: 11 July 2018