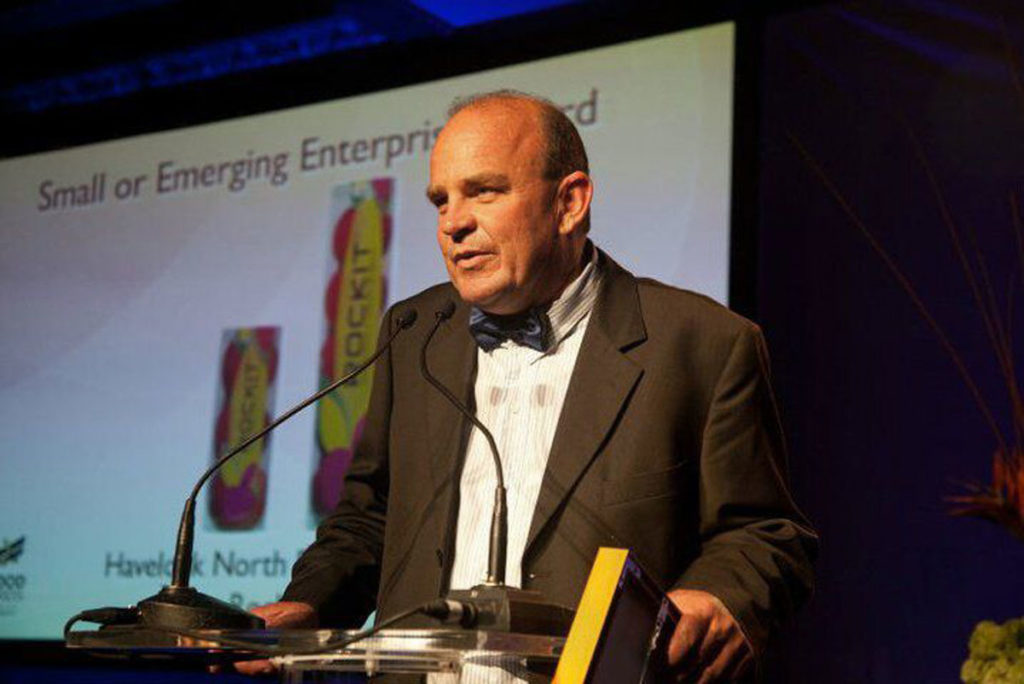 It is small, beautifully coloured and shaped, sweet, crunchy and distinctively different. The Rockit apple created in Havelock North is gaining space on international shelves.

The miniature apples are packed in tubes and marketed as a premium-priced snack food. The apples, which are slightly bigger than a golf ball, were originally developed by Plant and Food Research. The Havelock North Fruit Company bought the global rights to the Rockit cultivar in 2010, at a time when the rest of the industry was concentrating on larger apples. But Havelock North Fruit Company Founder, Phil Alison, said observing food trends and the move to snacking by consumers made him realise that confectionary was taking a large amount of money away from the fruit aisles and the opportunity to compete with a healthy alternative. Phil has been in the Hawke’s Bay pipfruit industry for many decades, serving several years as the industry association’s chairman.

“I wanted to create a premium food brand that wouldn’t look out of place on display as a healthy alternative to chocolate and chips.”

“I had a vision to create a global retail brand and, through Government support and investor funding, we now have global licence arrangements in more than 30 countries,” says Phil. Rockit apples are marketed in six different tube sizes and are available in supermarkets such as Marks & Spencer in the United Kingdom, fresh produce stores in Taiwan and across the United States, Asia, the Middle East and China, Asia as well as New Zealand supermarkets and boutique food stores.

In March 2015, after years of research and development, a multi-million dollar food packaging facility was completed in Havelock North bringing the current investment into the Rockit development project to between $17 and $20 million. The new operation employs 20 staff in head office roles from logistics to finance and marketing, another 90 people across the packaging plant and orchards and almost as many again for seasonal work. Rockit received Government support from New Zealand Trade and Enterprise for market development and Callaghan Institute for technical support for growing techniques and post-harvest storage. Phil then raised money through Tauranga-based Enterprise Angels.

World-wide consumer demand, which is up 700 percent in two years, proves a fruit such as an apple can be marketed as a premium snack food and compete against sugar-coated confectionery.  Havelock North Fruit Company Founder, Phil Alison

The company forecasts significant growth over the next five years, with more key innovations planned. “Obesity and unhealthy food offerings is a major health issue and by packaging the apple in a tube and creating some excitement around the brand, it’s now a formidable alternative,” he says.