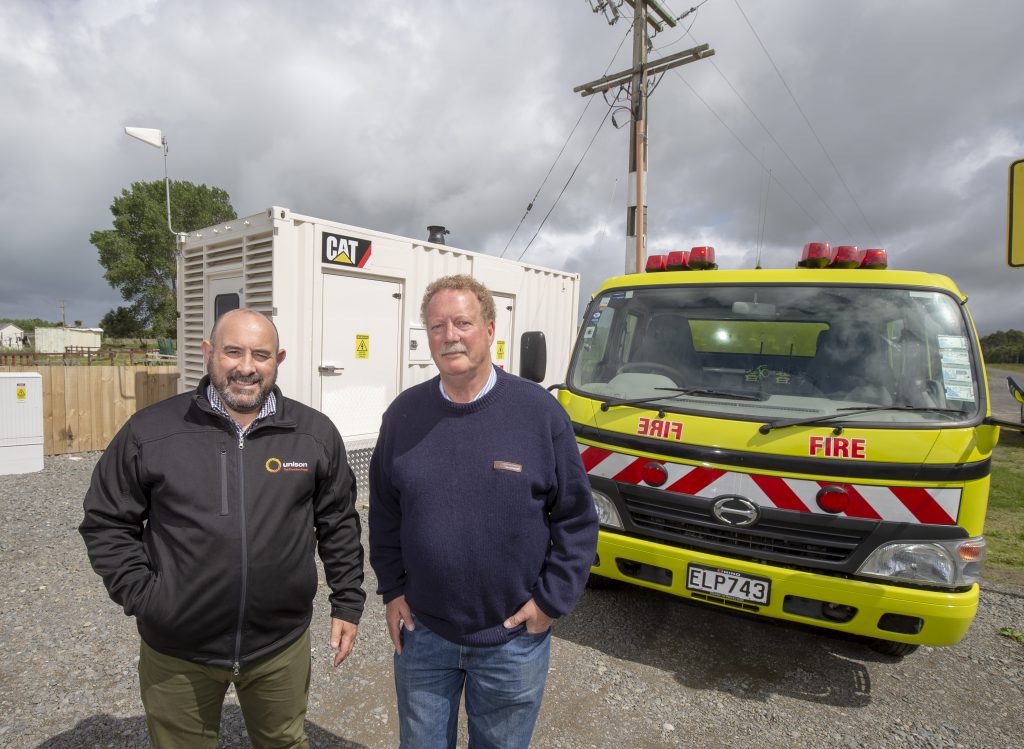 In a move to bolster the resilience and boost capacity of Waimarama’s power supply, electricity distributor Unison Networks has introduced backup generation capability into the community. Located adjacent to the fire station at the intersection of Waimarama and Te Apiti Roads, the 680kVA diesel generator – a first on Unison’s network – provides backup supply for up to 450 properties in the area, in the event of a planned or unplanned outage on the network. Unison Relationship Manager, Danny Gough said the generator allows a more resilient, adaptable and reliable power supply for the community. “The backup generator provides an alternative power supply at critical times, such as if the network suffers damage, and adds capacity during high load demand situations. “Added generation also allows us to be adaptable and manage routine maintenance in the area without significantly disrupting power supply for our customers,” said Mr Gough. Waimarama Controller for Fire and Emergency New Zealand and Waimarama Civil Defence, Peter Morrell said the generator is a welcome addition given the unpredictable nature of the weather. “There was a major weather event a few years ago where the supply was lost, and the battery back-up failed, causing telecom services to shut down. “It was one of those storms you never forget as the community was completely cut off, the roads were damaged, power was lost, and then the phones failed. A helicopter was required to fly in replacement batteries. “Having this back-up is going to be excellent support for keeping our community up-and-running,” said Mr Morrell. The Waimarama upgrade is just one of several generation projects Unison is working on to improve the reliability and resilience of supply for its customers, with a backup generator currently being commissioned in Rotoma (State Highway 30, between Rotorua and Whakatane) and another due in Rainbow Mountain (south of Rotorua) later in the year. “While the primary use of the generator currently is alternative supply, which is useful for planned and unplanned outages, there are other functionalities which will be built in and used over time including voltage support and peak demand management to future-proof the area for growth,” Mr Gough said. Once the capability of these generators is realised, Unison will be looking to utilise the solution at additional sites across its network regions. Photo: Unison Relationship Manager, Danny Gough (left) and Waimarama Controller for Fire and Emergency New Zealand and Waimarama Civil Defence, Peter Morrell with the generator. Posted: 3 December 2018