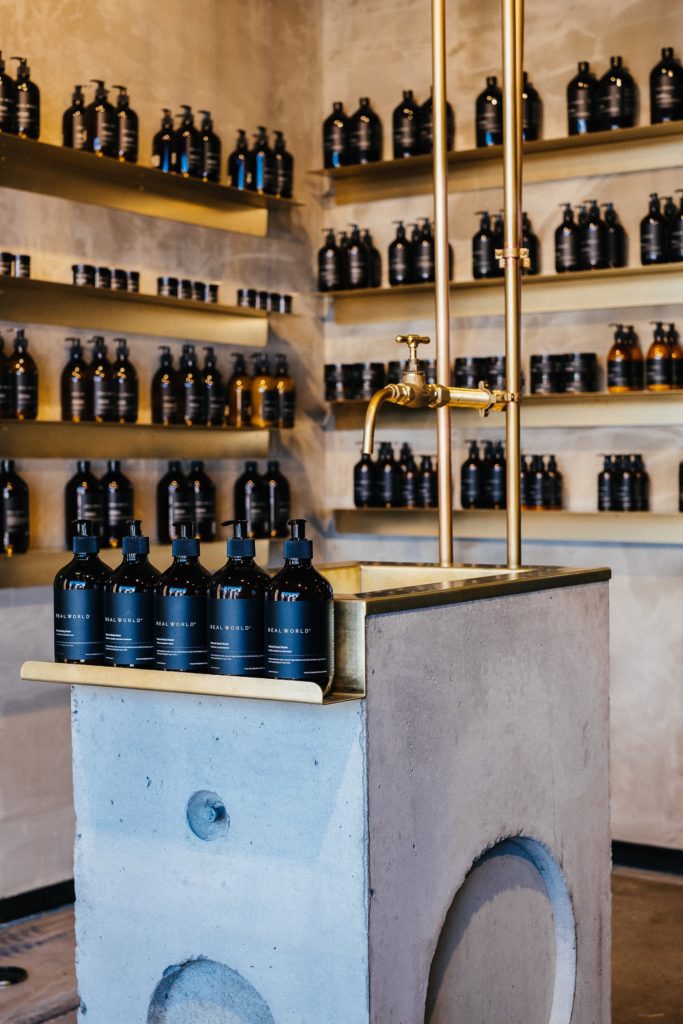 It’s a space with history, a sense of significance, and a hip industrial feel steeped in the heritage of Hastings. Nicola and Adam Mossman have proudly thrown open the doors to the Real World Refinery – a refill and retail store in Queen Street – and they say it’s the first design-led, fully integrated refill shop in the world. The space, where all Real World products are now made, packaged and sent out, is the former print plant for the Herald Tribune newspaper and dates back to the 1970s. “It formerly housed a colour printing press and the advertising department which connected via a futuristic air bridge. We have completely gutted the building and exposed a lot of the hidden gems that had been covered up over the years,” says Nicola. “Our fit-out is very industrial which is in keeping with the style of the building. We’ve reused and repurposed as much as we could, upcycling lights, reusing steel, cable trays, sinks, shelves and lots more! Adam has a very strong design focus and he has designed it all from scratch.” Some of the highlights of the clever fit-out include salvaged Dorman Long flanged beams from the old newspaper building next door. “Dorman Long also supplied steel for the Sydney Harbour Bridge,” Nicola tells. “We’ve used steel from frame work and turned it into tables and trolleys for the store.” 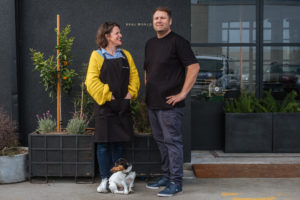 They’ve also repurposed the large pots that store their liquid products to feed the refilling station taps. “It was a bit tricky working out a way to get the liquid from the top to the bottom but it made sense to figure it out, and with the help of some local engineers we now have a plumbed, gravity fed system that supports both the front of house where we will refill customers’ bottles, and our behind the scenes warehouse staff filling orders.” Nicola founded the plant-based skincare company in 2016 after finding her hands were always cracked and painful from using regular commercially-available dishwashing liquid and hand care products. She began to create all-natural plant-based formulations using organic ingredients wherever possible – things like manuka honey, sandalwood, sage, lemon verbena, sea kelp and carrot seed – and starting out with a small assortment of 12 handwashes and hand creams. Now, the Real World range stretches to over 50 products that include body washes, bench sprays, lip balms, moisturisers and more, and can be found in luxury lodges such as Poronui (Taupo), Kamana House (Queenstown) and Craggy Range (Hawke’s Bay). “We’ve seen some positive growth in the accommodation sector as hoteliers increasingly turn to more sustainable refillable options rather than offering tiny throwaway shampoos, body lotions and hand soap.” Never content to rest on her laurels, Nicola says she listened carefully to customer feedback before embarking on the next step of her journey with Real World – building the business a new home. “Talking to our customers, it was clear that offering a run-of-mill refill bottle option was never going to cut it – they wanted a full-scale refill store. In fact, lots would save up their empty Real World bottles and bring them over to our place to refill them!” 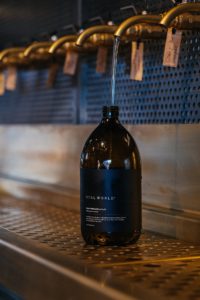 The couple say it wasn’t unusual to have clients knocking on the door of the family home, asking to have their hand soap and dishwashing liquid bottles topped up. They were only too happy to oblige – it sat well with their commitment to a more natural, sustainable future for New Zealand. But as the business grew to include major retailers, hospitality providers and luxury hotels, living and working from home was taking its toll. “We started our business in a cupboard, moved to the lounge not long after, then ended up in the garage,” says Nicola. “Sometimes it felt that Real World was taking over our lives completely and it became difficult living and working from home without a differentiation. It felt like the right time to create a bespoke factory, head office, refinery and our first retail store all in one, right here in Hawke’s Bay – where many of our customers are based.” All of Real World’s liquid formulations will be available to test and refill in-store, and the entire range available to purchase. Nicola hints at plans to plant their own lavender and chamomile crops in the coming years and at new products currently in the works including a laundry liquid. “And” she says “we would love to open more retail and refill stores around the country, so watch this space!” Real World | 211 Queen Street East, Hastings. Monday to Friday, 10am-3pm www.realworldnz.com