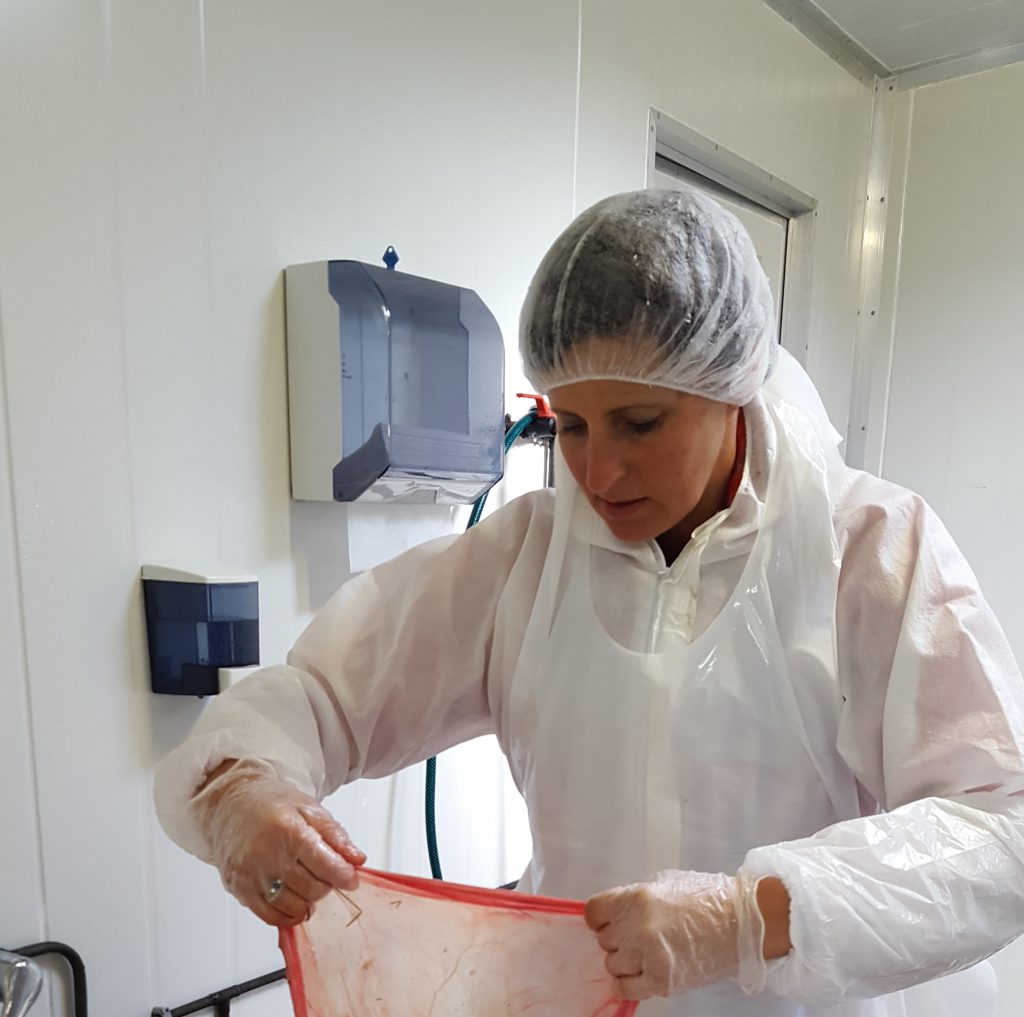 Agri-lab owner Angela Payne’s core business is processing animal placentas in to products for the cosmetic and dietary supplement industries, a result of “being in the right place at the right time” 20 years ago. Back in 1998 the then Central Hawke’s Bay veterinary nurse was contracted to consult to a meat company which was extracting specific glands from bobby calf carcasses for those industries. “When the company was taken over by a new owner they didn’t want that part of the business, so I took the customers over from there,” she says. That opportunity has led to her building Agri-lab in to an export business turning over $2,500,000 annually, with clients in the United States, Canada, South Korea, Denmark, Australia, Germany, Japan, Taiwan, Malaysia, Hong Kong, Thailand, Switzerland and Italy. All from her home base in Central Hawke’s Bay. While placentas are the core product, the company also works with offals, organs, glands and other specialised tissues of animal origin dissected and prepared to order for use in the manufacture of pharmaceuticals, dietary supplements, anti-aging and regenerative therapies, in both mainstream and alternative therapy markets. “Placenta sales are what we are most famous for, and we are the world’s largest processor of placenta for dietary supplement and cosmetic purposes,” Angela says. “We process from natural born sheep, horse, pig and cow placenta, and also from ex-works origin deer, sheep and cattle, all with export certification from Ministry of Primary Industries. “We can supply it in frozen or powdered (freeze dried) or serum form.” Angela says she visits farms all over New Zealand to audit supplies of live animal products, and in regard to stock accessed from meat works Agri-lab only deal with those licensed for export. “I visit specific clients from time to time, but the majority of clients come and visit me.” Angela says the company is a “secondary processor”, and all the finishing work is completed at a processing facility at her Hatuma lifestyle property, just south of Waipukurau. She is the only fulltime employee. Additional staff, including a production manager, process and production assistants are employed at the busy times of year – spring and autumn when stock are born being the main periods of activity. “The demand for products increased at such a rate that in 2002 we built the specialised processing facility to streamline current production, and allow the development of new products,” Angela says. “Since then the pack house has been expanded several times, with the processing space being doubled in size in 2010, and doubled again in 2014. “We now also do a lot of contract processing, including freeze drying of various meat, fruit and vegetable products, and other export and local market items. Contract processing now forms a significant part of the annual turnover, and product sales and client numbers are continuing to grow.” Clients come to Agri-lab by various methods – web searches, referrals, word of mouth and New Zealand Trade and Enterprise. It is a weird and wonderful world to the uninitiated, with products including sheep placenta powder and equine placental collagen powder for dietary supplement purposes, bovine brain gland powder (calf origin) for natural Omega-3 sources, amnions for membranes, calf brains for active brain gland extracts, bovine eyes for retinal and hyaluronic acid extracts, tendons and bones, spinal cord, cartilage and synovia, pericardium, and other glands to order. Basically nothing in the animals appears to be wasted. “World-wide interest in these products is increasing and the demand for correctly prepared raw materials is growing rapidly,” Angela says, adding that the business’ brand is “New Zealand, rather than Hawke’s Bay specifically”. “However I call it life living in the slow lane but only an hour from the fast lane. It’s a relaxed and pleasant way to live and that overflows in to work life.” After 20 years Angela is ready to sell the award-winning business*, but not to just anybody. “I’ve yet to find the right fit. It’s simple to run and extremely profitable. The business has huge potential for growth, some state of the art equipment, processing capability, intellectual property and access to unique ingredients and resources here in New Zealand. “So it’s waiting for an astute buyer.” When that buyer arrives they will get a business that “punches above its weight”, Angela says. “Agri-lab is a rapidly growing business that has demonstrated impressive sales and performance figures year in, year out since conception.” Whether or not the business will stay in Hawke’s Bay is debateable, as Angela says “it can easily be lifted and relocated elsewhere”. But it’s certainly yet another example that great things grow here. *Agri-lab has won many awards, including Angela winning the Rural Business Woman of the Year Award (Manufacturing) in 2013, and the business taking out the Exporter Award at the Hawke’s Bay Business Awards in 2006 and the Innovations Award four years later. Posted: 22 August 2018