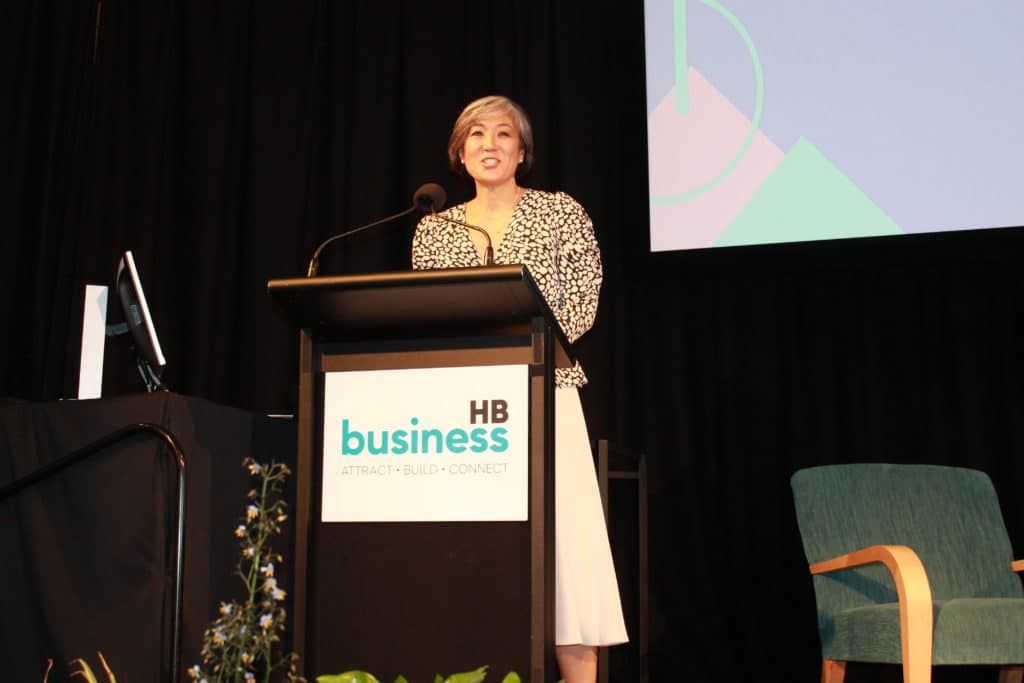 “Collaborate locally to thrive globally” was the message from the first national conference celebrating innovation and entrepreneurship held in Hawke’s Bay. US Consul General Katelyn Choe was one of the event keynote speakers at the I&E19 event and spoke of the opportunity of investing and exporting business to not only the US but globally. She said that opportunity has been made more accessible for New Zealanders and businesses in Hawke’s Bay with the new Kiwi treaty visas with the US. Treaty trader (E-1) and treaty investor (E-2) visas are for citizens of countries with which the United States maintains treaties of commerce and navigation, including New Zealand, and allows them to invest and trade business in the US. “We want businesses, such as those in Hawke’s Bay, to be able to grow and expand not only here but to have that easy global access, in particular in the US,” Choe said. “This treaty and visa deal allows that to happen and give these businesses that opportunity to grow.” Since the programme was started in 2018, 21 New Zealand businesses have been awarded with one of these specialised business visas. She said the innovation and forward thinking work that come from the regions such as Hawke’s Bay give businesses that opportunity to expand the market and ideas in the US. “New Zealand has that forward thinking around sustainability and innovation which allows them not only grow the global market but support the local businesses that they work around, whether that is from something like local farmers or local industry.” Founder and CEO of Hawke’s Bay based Fingermark Luke Irving said that being located in Hawke’s Bay has given them room to develop and expand to the global market. The company is the leading designers and manufacturers of digital technologies revolutionising operations and customer experiences in restaurants, airports, and banks. They are most notable in New Zealand in fast-food restaurants such as McDonald’s for their touch screen purchasing options, but have also spread their range to the global market and deal with KFC, McDonald’s and other top names in a global capacity. “We made the move to Hawke’s Bay really to find the room to breathe, in Auckland there is so much going on that you don’t get that opportunity to focus and try and move forward,” Irving said. “Being down in Hawke’s Bay hasn’t limited us at all also because we have been able to work and deal with other businesses that we can support or they can support us. “I’ll do my bit to empower and inspire Hawke’s Bay.” Managing director and Co-Founder of Mogul, an award-winning full-service digital marketing agency, George Miller said the opportunity for people to expand export overseas is there and will help the region. “The opportunity to expand onto the global market and export out of New Zealand is there and if export 30 per cent of our business just imagine what that would do for Hawke’s Bay.” I&E19 is a Business Hawke’s Bay led activity, and key action under Matariki, Hawke’s Bay’s Regional Development Strategy for economic and inclusive growth.   For more on this and other great Hawke’s Bay stories go to hawkesbaytoday.co.nz