Topp Solution For The Modern Farmer 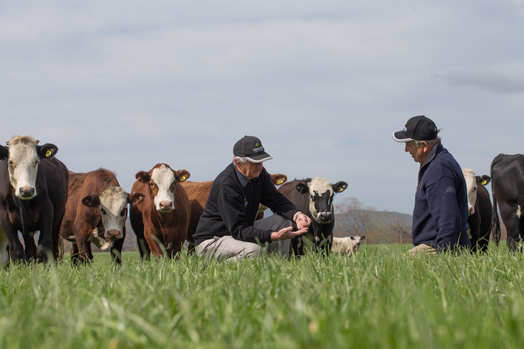 Joe Topp, inventor of the fertiliser known as Hatuma Dicalcic Phosphate (HDP), was a man ahead of his time, his grandson Aaron says. While dicalcic phosphate is a generic fertiliser term, the process behind HDP first-developed in 1962, is as much a tightly held secret as Colonel Sanders’ recipe. It is also a product which addressed many of today’s farming issues well before they became issues. The Hatuma Lime Company was started in 1932 by Wellington market gardeners who wanted a regular supply of limestone. They found it a few kilometres down Maharakeke Rd, just south of Waipukurau in the Central Hawke’s Bay, right next to what was then a functioning railway line. In the 1950s Joe was headhunted to be general manager due to the reputation he had forged running a Wairarapa lime quarry. He was soon confronted by a major problem. The Government decided to slash subsidies on lime, until then used by farmers as fertiliser, and subsidise fertiliser which grew more grass. It was then that his grandfather’s true genius emerged, Aaron, now the company’s director of marketing, sales and research, says. On the face of it he had just one major problem, “a market slashed off at the knees”, and the need to develop a fertiliser. “But Joe was a holistic, forward thinking fellow,” Aaron says. “He could see that an industry driven by the use of high analysis, water soluble fertilisers, without the benefit of limestone to balance them, would result in polluted water ways, nutrient saturated soils, and ultimately, high cost farming. He could foresee New Zealand finding itself in a predicament long before it became reality.” His solution was a top dressing product that would give farmers everything they needed, providing sustained benefits throughout the year, and not at the soil or the environment’s expense. Hatuma Dicalcic Phosphate was born, made by reacting lime and superphosphate under carefully controlled conditions. It has the following features:

The Topp family took ownership of the company in the 1980s and several of them are among the 45 staff today. They are as passionate about their grandfather’s vision as he was. Joe’s son and Aaron’s father, Clifford Topp is managing director. “Sustainability wasn’t one of my father’s words, it was always environmental,” Clifford says. “If you didn’t look after the soils properly, and treat them with due regard, it would be disastrous for the nation.” It hasn’t been an easy ride as a boutique company up against industry giants – “towering co-operatives born on the foundation of water-soluble fertiliser”, as Aaron puts it. “In 1962 few could understand Joe’s objective of creating a low phosphate fertiliser that wouldn’t run off into waterways or overload the soil, would work with the organic cycle to build soil humus and, most importantly grow strong, healthy stock,” Aaron says. “It has to be said though, that there were immediate devotees, and generations later those farming families all over the lower North Island are still using HDP. “But we are one product amongst a plethora of products on the market.” However Hatuma Lime Company has held its own, and the worm, so to speak, is turning in their favour as the realities of climate change, increased input costs and tighter environmental rules due to high intensity farming and the resultant polluted rivers and lakes, hit home. “Getting more for less, while building resilience and protecting the environment, is the future,” Aaron says, adding that industry soundbites are now extolling the virtues of what HDP has offered for more than half a century. “Commodities are out, and quality is in. Overseas they want to know how our lamb and beef are grown. Is it done in a way that maintains our pristine environment? Does it come from an efficient and sustainable farming operation? We fit the NZ Inc. story.” HDP’s presence in the market has increased due to the company’s decision in 2009 to license lime quarries nationwide to manufacture the fertiliser under strict regulations and quality control. Alongside their sites in Hatuma, nearby Waipawa and Wairarapa, are quarries in Northland, King Country, Canterbury and Otago. They have also entered into an exclusive supply and sales partnership with market leading Ballance Agri-Nutrients, one of the “towering co-operatives”. The company has not stood still in regards to research and development of HDP, and it has been refined through the decades. In 2009 it contributed more than $1 million towards an independent ‘Farming for the Future’ research programme in association with The AgriBusiness Group to validate the benefits of the product. The findings were completely in line with previous on-farm experiences and in-house research: non-water soluble, higher stocking rates, no compromise on production, better efficiencies, cost effective, and low nutrient loss. HDP remains the jewel in the crown of this family-owned Hawke’s Bay company which also produces garden fertiliser and lime for agricultural purposes, while operating a full blending facility. “HDP differentiates us from other lime quarries,” Aaron says. “It drives a strong part of our culture in terms of how we talk and our relationships with farmers. “You now have a new breed of farmer that has been brought up with a greater awareness. We’re on to third and fourth generation HDP users. “Their grandfathers and fathers were streets ahead of their time in terms of leaving their farms in better shape than when they took over. “We have huge loyalty. Kindred spirits… pioneers of how we can farm more effectively, get more for less. “I firmly believe Hatuma DP, born and bred in Hawke’s Bay, has a huge part to play in New Zealand agriculture’s future story. There’s an obligation for us to share with the greater farming community the solutions that we’ve learnt from research on the hill country to low country pastures, on different livestock farms in different climatic conditions. It can only be for the betterment of New Zealand farming.” Posted: 4 July 2018