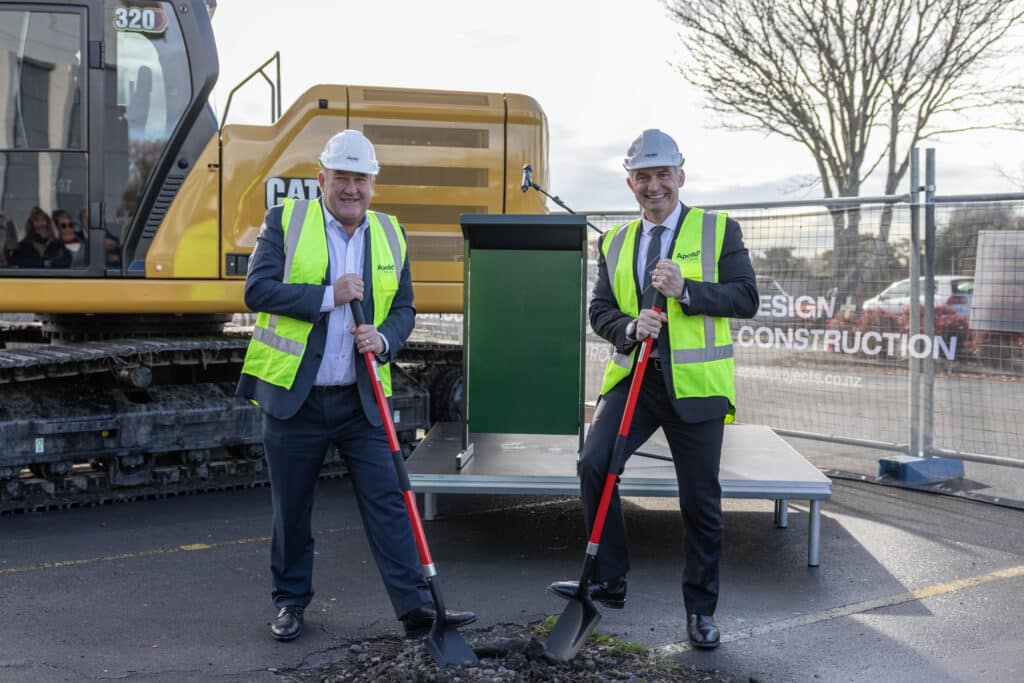 Hawke’s Bay youth can look forward to much needed indoor court space for fast growing sports such as basketball, futsal, netball and volleyball with construction starting on the new regional indoor sport facility in Taradale.

“The new indoor sport facility is the largest investment in the wellbeing of youth in Hawke’s Bay and although we are off the start line thanks to the $13.5 million commitment by three vital funding partners, we need more money to complete the project.

“We are looking for a broad range of funding support. The facility is already much needed as the four main users basketball, futsal, netball and volleyball are the fastest growing sports for youth,” said Mr Waterhouse.

The new 5900m2 facility set to be completed in July 2022 and built by Apollo Projects, will be behind the Pettigrew.Green Arena, which was opened in April 2003.

“Thanks to the generosity of the Pettigrew Family and Rodney Green we have had the arena serve the community for nearly 20 years. Community demand has increased significantly and we have also missed out on hosting large national sport events.

“The new facilities extra capacity will enable us attract national events especially at age group level and the region now has a very compelling sport facility proposition to host significant events with the regional sports park and all it offers as well.

“This will have not only a substantial impact on the health of our community, but also be an economic driver with additional sporting events held in Hawke’s Bay,’ Mr Waterhouse added.

The Economic and Regional Development Minister and Napier MP Stuart Nash is a strong supporter of the expansion and announced government funds for the project less than a year ago.

“The Government is backing this project with $6.4 million from COVID recovery funds designed to support local jobs and businesses. It’s part of our strategy of investing in provincial New Zealand and making strong communities by building regional economies.”

“The Pettigrew.Green Arena is already a valued recreational facility, but its popularity means it’s now too small. This new facility will change that and the new improved arena will be a fantastic asset for the whole region.”

“The enhanced capacity will also keep up the momentum of economic activity in Hawke’s Bay. Businesses in construction and service sectors, as well as a host of supporting industries like tourism providers, accommodation and hospitality, are now seeing the benefits of our economic recovery.

“The project is already giving a boost to the Hawke’s Bay economy and creating construction jobs – once it is finished, the arena’s ability to host large events will provide even more jobs and encourage visitors from other parts of the country.”

Napier City Councillor Keith Price says the need for additional indoor space, due to the growth of indoor sport, has been a long time coming.

“Napier City Council has been working on this project for over four years after clearly identifying the need for indoor facilities in Napier, and the whole of Hawke’s Bay.

“We put $4.1 million into the Long Term Plan four years ago to support this project.

“Basketball has a phenomenal  growth and is in dire need of more court space so this growth can continue, as are the likes of futsal, netball and volleyball.

Mr Price says the project would not have progressed to construction stage without the commitment of the RISEC board and chair Craig Waterhouse.

“I have worked closely with Craig on this project and congratulate him on the work he has put in. He has driven this through many hurdles and if it wasn’t for him I don’t believe we would be turning the soil today.

“Let’s all get behind this opportunity to support the community.”

Basketball Hawke’s Bay general manager Nick Hogan says “the addition of new courts is an exciting development which will allow us to continue to cater to our rapidly growing participation base. The courts will only increase the active recreation and sport opportunities we can offer to our community.”