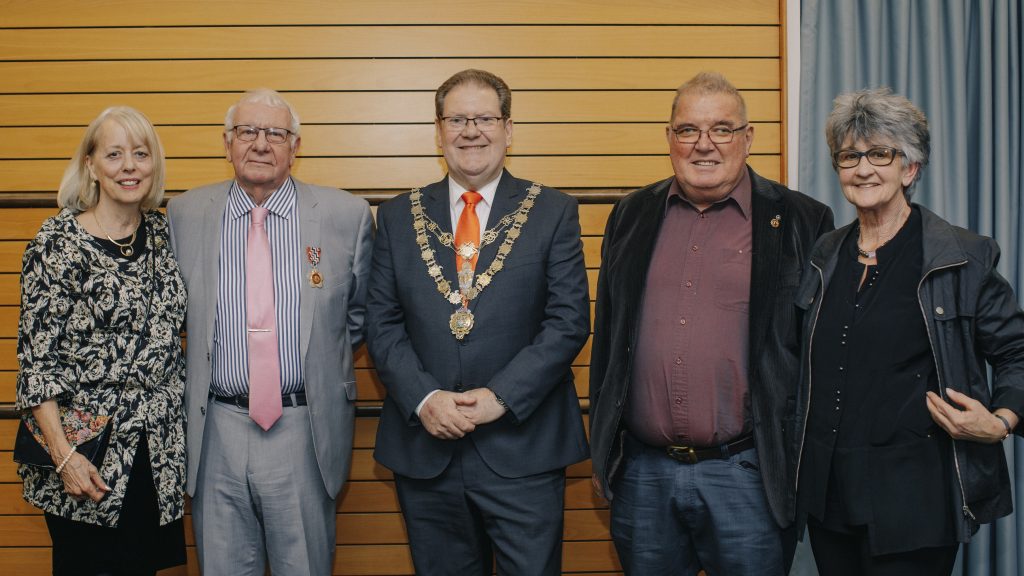 A former Mayor of Napier and a long term local Rotarian are the recipients of the 2018 Napier Citizens’ Civic Awards. The awards, which took place before an audience comprising family, friends, close work and former colleagues and were hosted by Napier Mayor Bill Dalton. “It’s an honour to be able to recognise these two dedicated, humble men who have done so much for Napier over so many years,” he said. John Hennessey, Chair of the Rotary Pathways Trust and Whatever it Takes was awarded a Citizens’ Civic Award, while former Mayor Alan Dick was awarded The Freedom of the City. Between them Alan Dick and John Hennessey have been involved with helping a vast number of people in the Napier community in very different ways. The common thread which binds them is their dedication and commitment to helping others. John Hennessey, a long serving member of the Rotary Club of Ahuriri, has spent over 20 years helping others through the rotary club itself, raising money for and supporting the community. He has also spent the last 15 years chairing the Rotary Pathways Trust transforming Napier’s walkways and cycleways. John has also served on the board of Whatever it Takes, which helps those in need have access to a Lighthouse day centre in both Napier and Hastings, recovery programmes, residential care facilities, ‘return to work’ programmes and whatever support people with mental health difficulties need to live well in the community. Alan Dick, recipient of the Freedom of The City, served four terms as Mayor of Napier, along with tenures on the Hawke’s Bay Harbour Board and as a City Councillor. He is currently a Hawke’s Bay Regional Councillor. Alan has been Chair of the Napier City Pilot Trust and part of the YMCA movement over many years. He has been focussed on helping find innovative solutions to crime, vlolence and youth issues in the community. Alan is also proud of the youth development projects he has been involved in, including the programme of conservation at the Ahuriri estuary which still continues today. Photo: From left, Liz Dick, her husband and former Napier Mayor Alan Dick, recipient of The Freedom of the City, Napier Mayor Bill Dalton, John Hennessey, recipient of a Citizens’ Civic Award for 2018, and his wife Gail. Posted: 10 September 2018