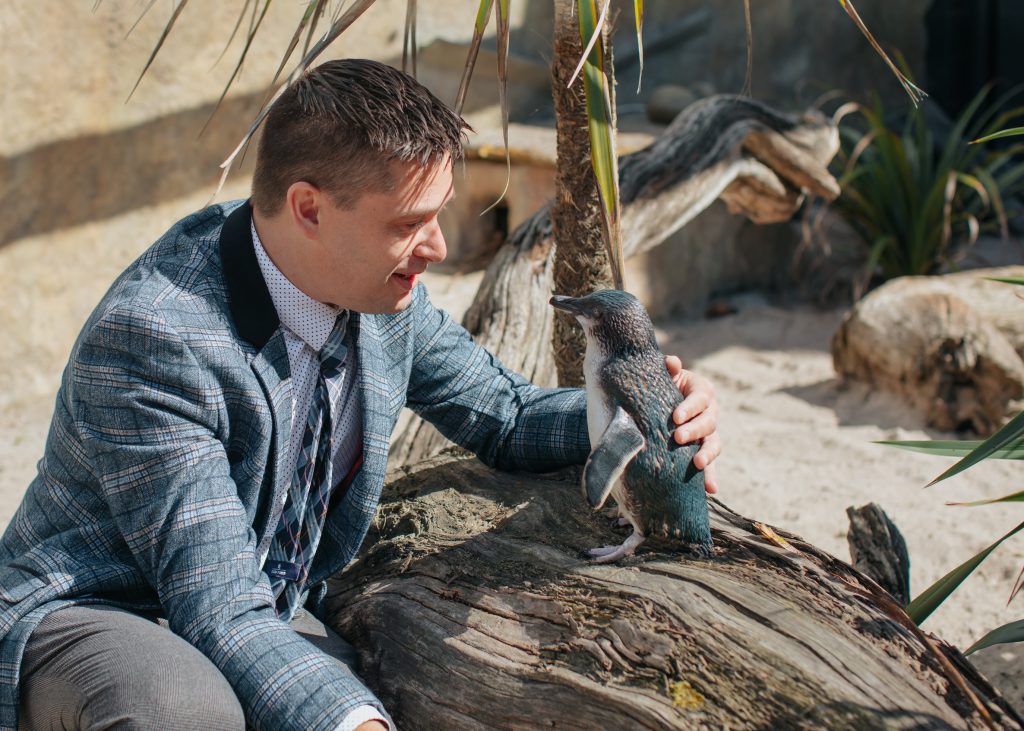 Adrian Fowler, a wildlife veterinarian, has travelled to and lived in plenty of interesting places, and has the stories to match. The Director of The National Aquarium of New Zealand grew up in the UK and realised early on that he wanted to work with wildlife. “As a child I would surround myself with animals. It just seemed natural to go to vet school,” he recalls. However, while his fellow students spent their holidays working in more conventional practices, dealing with horses, cows and people’s pets, Adrian found himself training alongside specialists at Miami Zoo in Florida and Loro Parque in the Canary Islands, treating manatees, dolphins and other more exotic creatures. In addition to Adrian’s veterinary work, his jobs have included curating at the world’s largest natural habitat zoo, the North Carolina Zoological Park, running a gorilla and chimpanzee hospital in Cameroon, and leading Sacramento Zoo in California. Adrian was asked to launch a major campaign to fundraise and raise awareness of the plight of endangered species, on behalf of America’s Association of Zoos & Aquariums, teaming up with young conservationist and FishFlops creator Madison Nicole Robinson. The AZA’s members have about 180 million visitors a year between them. The campaign wasn’t just about connecting with these people, but reaching out to a much wider audience. It’s a sure bet that not many aquarium directors can say they have been interviewed by Teen Vogue, or shared a taxi across New York City with a couple of African penguins. Adrian’s interest in the species’ plight – they are critically endangered – was piqued by meeting Lily and Winnie. These Ambassador birds from the Maryland Zoo were the inspiration for his work in South Africa this year, helping to treat and rehabilitate wild penguins with SANCCOB (The Southern African Foundation for the Conservation of Coastal Birds) in Cape Town. “We did some amazing stuff. While I was there we successfully completed our first penguin to penguin blood transfusion. Syd, one of the birds who can’t return to the wild, helped save a penguin who had lost a lot of blood from what looked like a shark bite.” Just a few weeks into the job, Adrian’s getting to know the animals at the National Aquarium rather well, particularly the little penguins. “Working closely with animals is very important to me and I am really looking forward to being part of the team dedicated to their care here.” He is also very excited to be leading the aquarium expansion project. “This is a great aquarium but we want to build an even better one. “It has to be animal welfare driven, with a strong focus on education and conservation. The aquarium of the future needs to be amazing, not just as an attraction but to serve as a catalyst for a thriving economy. It’s good for the country to have an iconic national aquarium and we need a wide reach, in terms of education and changing the world’s attitude to the environment.” Adrian is also keen to build on the connections he has made, for example, with SANCCOB. The charity’s educators reach a global audience through technology. “We should be looking at things like that, the fact we’re in New Zealand makes no difference. We already do some amazing conservation work here – particularly with Kiwi – and we should aim to become a centre of excellence, recognised not just at home but internationally too.” He also has something special planned for the Yuletide season, that goes beyond a few Christmas decorations. “I want families, and the community to think about giving something to the planet, to think about what sort of future they want for kids. Little things, even refusing to use a plastic straw, can make a big difference to the wildlife around us.” Photo: Pals – Dr Adrian Fowler, Director of The National Aquarium of New Zealand, with Timmy. Posted: 4 December 2018