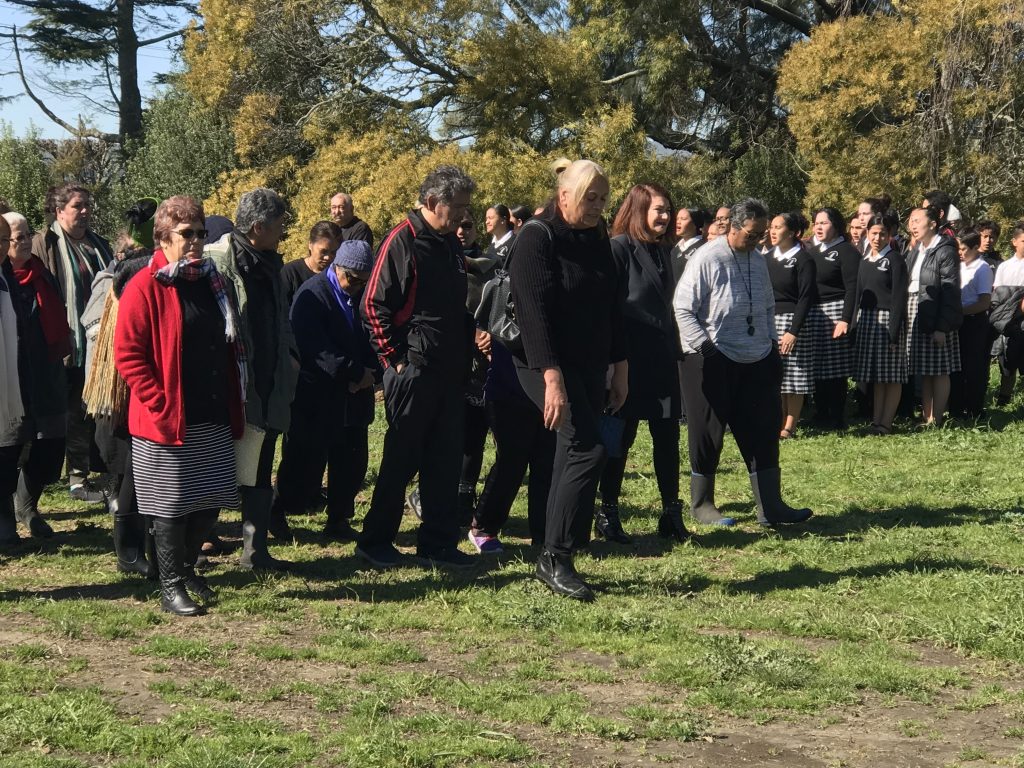 A collection of harakeke planted at Te Awa o Te Atua Reserve was this morning blessed to mark the start of Te Wiki o Te Reo Māori. The reserve, situated at the Longlands Rd roundabout, is home to more than 1200 harakeke (flax) plants, which started being grown there in 2011 from a collection provided by Rene Orchiston. From Gisborne, Mrs Orchiston started collecting harakeke in the 1950s after observing many craftswomen in her area were using inferior material for their weaving. Noting the shortage of special cultivars needed for different types of weaving, she visited many marae and individuals on the East Coast of the North Island and other parts of the country talking to elderly weavers and carefully recording the information of the plant varieties and uses. Samples of these plants then formed a collection that from 1987 was grown at Manaaki Whenua/Landcare Research in Havelock North, before the Hastings District Council began growing them at the reserve. More than 50 harakeke species are now at Te Awa o Te Atua, and are regarded as a taonga that has been handed down from generation to generation. These plants will ensure weavers will have access to good quality harakeke to take the traditional practices into the future for the benefit of anything from education to economic development and tourism. Once the plants reached their maximum growth, the plan was to distribute them to local traditional weavers throughout the rohe, while continuing to maintain and care for the community planting at the reserve. Today’s whakawātea (cleansing ceremony) was led by Jerry Hapuku, Cordry Huata and Thompson Hokianga and attended by mana whenua, Hastings district mayor Sandra Hazlehurst and Hastings District Council staff who had been involved in the project. A group of students from Te Kura Kaupapa Māori o Ngāti Kahungunu ki Heretaunga accompanied the occasion with karakia and waiata, and attendees took a short hīkoi through the plantings. Mrs Hazlehurst said that it was through Mrs Orchiston’s visionary work of collecting and growing cuttings more than 30 years ago that future generations of weavers were ensured access to good quality harakeke. “She selected varieties chose for their muka (fibre) or raranga (weaving/plaiting) strength, and colour qualities. “We all have a major role to play in protecting and maintaining this taonga for our rangatahi. “We are blessed to have Rene’s vision and we value the relationships that have grown through this wonderful flax reserve.” Meanwhile all Hastings District Council staff were celebrating Te Wiki o Te Reo Māori with a number of events and initiatives ranging from short, daily waiata sessions to a mini-lecture series, and various activities were being held at Hastings libraries. In addition the council is inviting the general public to get on board with a daily quiz and learning resources posted on the council Facebook page. Photo: Hastings mayor Sandra Hazlehurst joins mana whenua on a hikoi through the harakeke at Te Awa o Te Atua Reserve. Posted: 12 September 2018