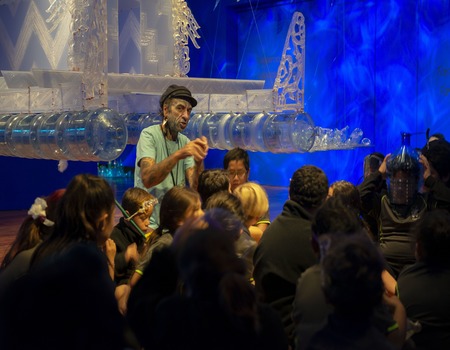 Exhibitions created from a vision of the future and recordings of the past have earned MTG Hawke’s Bay two finalist slots in the national museum awards for 2019. This is the sixth year in a row that the region’s museum has made the finals of the national ServiceIQ NZ Museum Awards. George Nuku: Bottled Ocean 2118 is a contender in the Most Innovative Public Programme category, and The House of Webb: A Victorian Family’s Journey to Ormondville is a finalist in the Social History category. “To be named as finalists in these awards even once is brilliant, but to have it happen six years in a row is really impressive. It’s wonderful to have the work of our talented team recognised in this way,” says Laura Vodanovich, MTG Director. “These exhibitions were very different to each other and yet the public response to both was equally as strong. Engaging our community is what we’re all about and both these exhibitions have done just that.” In Bottled Ocean 2118, Paris-based, Hastings-raised artist George Nuku presented a vision of the future in which the world is covered with water, and where the surviving life forms have adapted to the proliferation of plastic. This exhibition was the culmination of three weeks of creative collaboration with schools, polytechnic groups, members of the public, many of George’s friends and whanau, and organisations such as Pare Kore, the National Aquarium of NZ, and Te Matau a Māui Voyaging Trust. The high level of interest, and public interaction with tours, artist and floor talks showed how much Bottled Ocean 2118  struck a chord with people from Hawke’s Bay, New Zealand and beyond. The House of Webb exhibition grew from a plain red book labelled ‘Letters from New Zealand’. One of the treasures of the MTG collections, the letters date from 1884-85 and were written by the members of the Webb family, Reverend Anthony, his wife Patty, their seven children and three nephews who emigrated from England to settle in Ormondville. The letters, which also contain watercolours and sketches, were lovingly preserved by the recipient, Mary Webb, who lived in England. Besides creating stronger ties with the Southern Hawke’s Bay community, the exhibition has been enjoyed by a wide range of people. It provides the perfect forum for social history, decorative arts, fine arts and literature to be discussed in a number of ways, such as behind the scenes tours, which were booked solid, along with art and writing classes held within the exhibition space. The winners will be announced on 22 May at Te Papa as part of the Museums Aotearoa conference. Last year MTG was a finalist for two exhibitions and He Manu Tioriori 100 Years of Ngāti Kahungunu Music was a joint winner in the Exhibition Excellence – Taonga Māori category. Tūturu, a collaborative project between MTG and Iwi Toi Kahungunu, which was the other finalist in 2018, won the installation category and overall supreme award at the 2017 Resene Total Colour Awards. In 2017, Somebody’s Darling: Stories from the Napier Cemetery 1855-1917, was a finalist in the Museum Visitor Experience Award category, and the previous year, Tēnei Tonu, Talanoa: Colloquies of the unrecognised worker, and Pin Wall were finalists in the Best Taonga Exhibition for a Regional Museum, Best Art Exhibition for a Regional Museum, and Best Museum Project categories respectively. In 2015 MTG won the best exhibition under $20,000 category for Dr Felkin and the Forerunners, which examined a unique part of Hawke’s Bay’s social history. That same year MTG was also a finalist in two other awards – best exhibition over $20,000, and most innovative use of Te Reo Maori, for Whetu Tirikatene-Sullivan – Travel in Style.  In 2014 MTG won Best Museum Project, for the facility’s redevelopment, and was a finalist in the most innovative use of Te Reo Maori category, for the Taonga Māori exhibition Ūkaipō – ō tātou whakapapa. Photo: Artist George Nuku chatting with children during a workshop for George Nuku: Bottled Ocean 2118 Posted: 5 May 2019