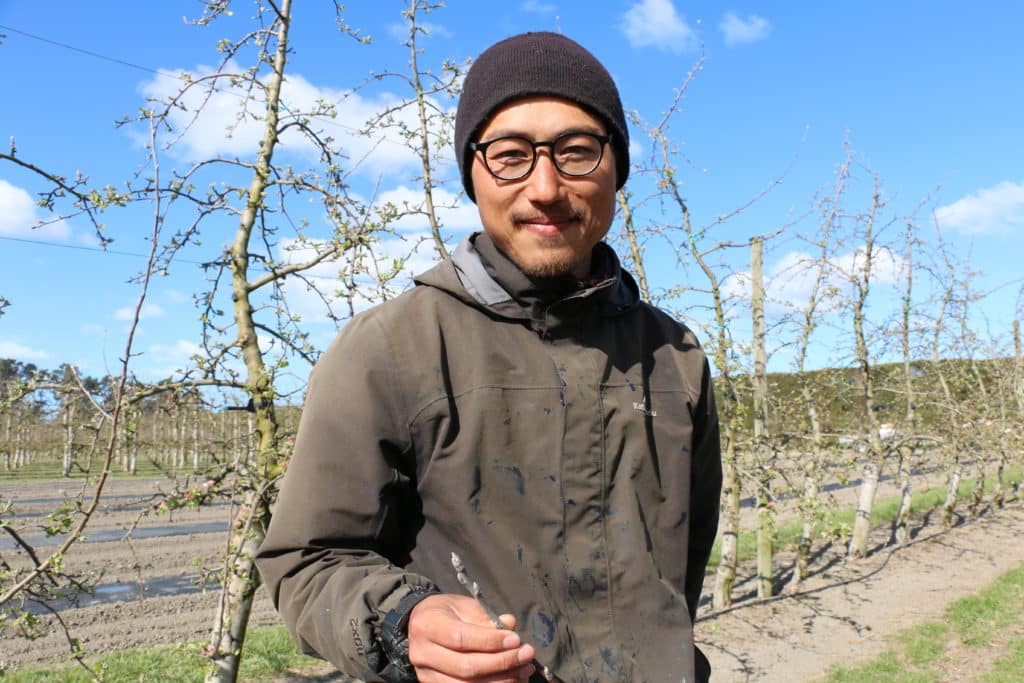 Fumiaki Omae, widely known as Fumi, always had a passion for the great outdoors and dreamed of travelling and exploring the world. He grew up in a city close to Osaka in Japan and worked there as a retail manager. One day he had enough of it all and decided to hit the road with nothing else other than a backpack and the spirit of adventure. Destination – New Zealand. To finance his trip Fumi took up a contractor job as a fruit picker and thinner at the orchard of Robyn and Leon Stallard in Hastings. He was living with other backpackers on the caravan and cabin site which was set up on the orchard. “It was such a friendly and nice work environment, similar to a summer camp. We were even allowed to use the Stallards’ tennis court.” In 2015 he attended an English Language programme at EIT and now, four years later, his English is impeccable. However, Fumi continued to travel and dropped anchor in Cromwell where he started to study fruit production at Otago Polytechnic. He was fascinated to learn about botany, soil management and how weather and climate impact the growth of fruit. Continuing a nomadic life Fumi moved back to Hawke’s Bay where he gained a Diploma in Horticulture at EIT. “I was under quite some pressure as I had to pass the course to keep my visa. But the tutors were so supportive,” he says. With more expertise under his belt Fumi returned to the Stallards, this time ready to assume more work responsibility. “We are only three full-time workers on the orchard, Leon included, and I can do and learn so much.” Other than pruning, thinning and picking, Fumi is responsible for apple quality and irrigation control. He also manages the fruit pickers. Meanwhile, the Stallards’ orchard, which recently won the Hawke’s Bay Horticulturist of the Year Award, has become his second home. “It’s not easy for a foreigner like me but as the saying goes, you live and you learn. Everything that I do here in New Zealand is a new challenge,” Fumi says. Speaking of new challenges – Fumi is planning on upgrading his skills and taking the next step up the career ladder. “I want to enrol in the new Diploma in Horticulture – Fruit Production programme at EIT which I can study while still working’. After all I have to stay up-to-date with the latest news in the industry, don’t I,” he smiles. Fumi spends his free time like the average New Zealander, he loves hanging out at the beach, surf-casting, meeting friends. He also plays badminton for a Hastings club and has rediscovered his passion for DJ-ing. He is considering to turn it into a little side-business. Just another new challenge.