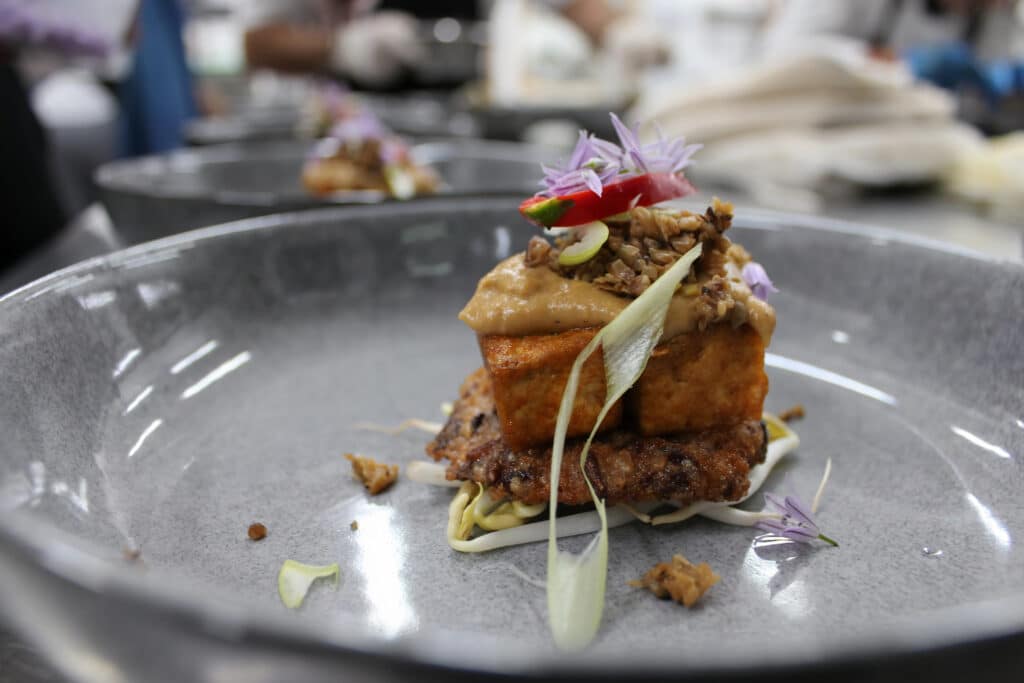 There was not a rump steak or chicken breast in sight as sixty guests enjoyed an eight-course plant-based degustation dinner prepared by an EIT Chef-Tutor and his students recently.

The dinner, which was held at Scholars Restaurant on EIT’s Hawke’s Bay campus, was created and prepared by Earl Zapf and students in the new Plant-Based Cooking [Level 3] programme.

On the menu was soughdough bread, with carrot and hazelnut pâté; golden beat; walnut tartare; mapo tofu; kumara and kimchi dumpling; asparagus, and portobello mushroom, topped off for dessert by popcorn mousse, with strawberry, salted caramel and pistachio.

Earl says three to four days of preparation was needed as everything was “made from scratch”.

The meal was the final assessment in the 25-week part-time programme and Earl says students were offered two tickets each to invite friends and family. Guests were served by staff and students in the School of Tourism and Hospitality, with a few of Earl’s students also helping out.

“It went very well and came together much better than I thought. There was a lot to do, with 60 paying guests and eight courses. That’s 480 plates of food that need to go out perfectly in the right time.” 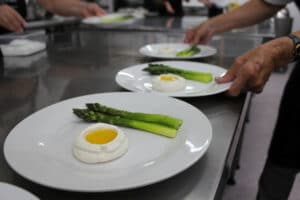 So, how did he rate the students’ performance?

“They knocked it out of the park. I had it all written down for them, so it was reasonably well organised, but they stepped up. I was really impressed with how well they took to it, because that was their first day in a proper restaurant kitchen doing a production.”

“It was probably one of the better dinners I’ve ever done because the difficulty of coming up with eight courses of plant based food. The feedback was great with everyone, including the meat eaters out there, satisfied with it.”

He says he enjoyed preparing all the courses, but there were “stars of the show”.

“Visually the dessert looked stunning, but there were also so many different flavours in there. The mapo tofu was a really exciting dish to work with, because that took so many steps and evolved so much over the four days.”

“I really enjoyed taking basic dishes that we did in class, refining them and turning them into fine dining dishes.”

Earl says the important aspect of a degustation meal is that one dish needs to flow into the next to make sense as a cohesive, consecutive picture. 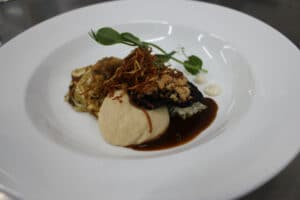 “With plant-based cooking, a lot of it is just being aware of how you are going to get strong umami flavours into your dishes. We work a lot with fermented foods, reductions and different combinations of flavours and you can’t hide behind a big chunk of well-cooked meat.”

“It exposes what you know and what you do and how you do it, but I find it much more rewarding because for me, creativity is enhanced by restriction of what you can work with. It’s an exciting challenge,” he says.

Earl says some of his students were looking forward to progressing on to EIT’s new Level 4 Plant-Based cooking programme, which begins in 2022.

“Also, anyone wanting to enrol in the Level 3 programme should do so soon as places are filling fast.”