What Do Kids Know? 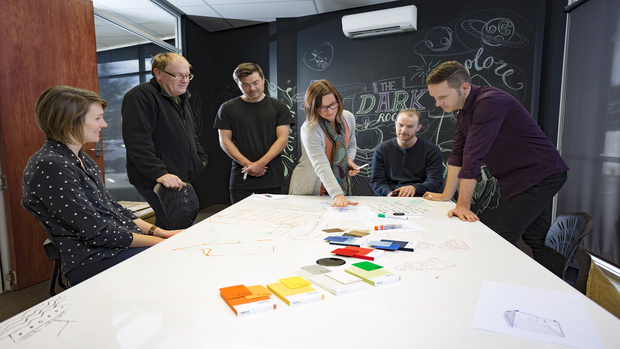 Furnware works hand in hand with schools around the world, designing and creating furniture so children can thrive in the most inspiring learning spaces imaginable.  Based in Hawke’s Bay, Furnware has achieved major success in markets throughout the world by keeping customers at the forefront of everything they do. This innovative company had its beginnings in 1934 with the aim of developing school furniture that put teachers and students first. The factory produced high quality wooden furniture and a few interesting little product offshoots on the side, including polo balls and coffins. During the baby boom of the 50’s, new schools were opening up all over the country. Furnware products were in high demand during these years with durability and functionality the major selling point. Comfy, supportive furniture was just a dream for wriggly, distracted kids in the ‘50’s. Along came the 70’s and the company embarked on a major change. Out went the trusty plywood chairs that had been produced for so long, and in came new plastic models, which were produced in a wide range of exciting colours. The plastic chairs continued to be produced into the early 80’s and the company’s product range expanded to include furniture that would enhance the desks and chairs. Along came mobile units, trolleys, lab benches and stools, draft desks and assembly forms. Schools were beginning to change and Furnware was determined to support the growing focus on better learning. By the end of the 80’s schools were able to control their own budgets and this allowed them to order the furniture they required, when they needed it. These Government led reforms opened the way for Furnware to employ its own salesforce and the company’s sales staff relished the chance to find out what schools, teachers and students really wanted. In 1993 Hamish Whyte and his family became the sole owners of Furnware. This signalled the development of a true customer focus that saw company representatives spending time in schools to further develop the range of furniture on offer. Constantly on the road and in the classrooms, Hamish lived the philosophy that the company needed to walk in the shoes of its customers. He even took a leap of faith by bungy jumping in a techno chair and by the end of the decade Furnware products were being marketed in Australia, the USA and Europe. As Furnware moved confidently into the 21st century there were more exciting changes on the horizon and in 2003/2004 a major project began which would measure the size and shape of 20,000 long, short, bulky or bony kids from around the country. The results of this study brought about a complete change in the way school furniture was designed and built. The award winning Bodyfurn range was developed that includes innovative designs which reflect the way students of all sizes use school furniture. Parts of the chairs actually move as the kids move, improving comfort, physical wellbeing and focus. The Bodyfurn range was awarded the Designer Institute of NZ’s Design Innovation Award in 2005. Furnware was delighted with the recognition that was associated with its new range of furniture but the approval that mattered most came from the students and teachers themselves. They couldn’t believe the huge difference the furniture made to comfort and concentration. In 2009, the company opened a new office in Victoria Australia and now has offices in Brisbane, Sydney and Adelaide. In 2014, Furnware expanded into the thriving Asian market, with the Singapore office currently developing new and exciting partnerships with schools. The huge success of the Bodyfurn range required the company to expand, and new offices were built in Hastings to allow for an increase in production and to display an ever expanding range of furniture.  The company began a sponsorship programme in the mid 90’s which supports education organisations and a wide range of community groups. This programme continues in all its markets today. Furnware is a modern company that embraces the latest technology. It is currently working with world leaders in 3D software design and this partnership has resulted in a revolutionary app that will design a learning space, putting all furniture options in place so customers can immediately see how it will look in their own classrooms Furnware is a truly innovative company that works hard to connect with the aspirations of schools around the world. They deliver products with quality, timeliness, innovation, reliability and genuine care. Everything that is created is designed to stand the test of time, with an eagle eye on the future. Posted: 7 July 2018