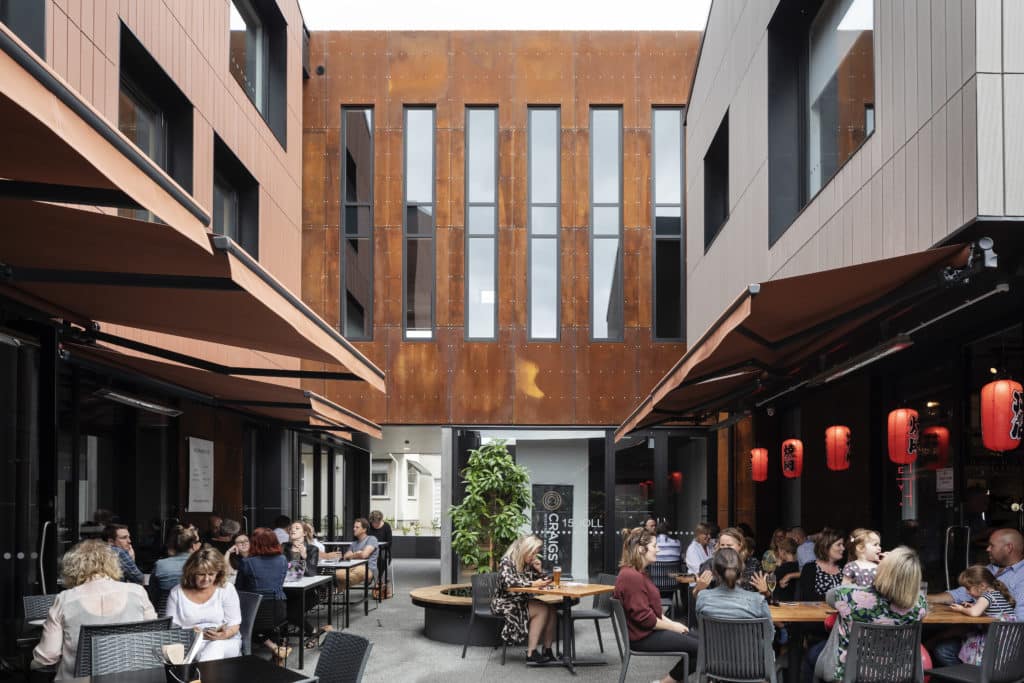 RTA Studio, an award-winning architectural practice that has been shortlisted in the World Architecture Festival 10 years in a row, has opened a branch in Havelock North.  “We currently have five active projects spanning various typologies in Hawke’s Bay so establishing a base here was a natural progression,” says architect Richard Naish who founded the Auckland firm in 1999.

The office has been set up in shared workspace at Joll Road, a mixed-use commercial, retail and hospitality development which RTA Studio designed and which has just scooped a win at the NZIA 2020 Gisborne and Hawke’s Bay Architecture Awards in the Commercial Category.

Architect David Wright, who will steer local operations, jumped at the chance to relocate to the region four years ago.  He sees the move as a sort of homecoming: “I’ve had a long-standing passion for Hawke’s Bay through working in the vineyards as a student and attending sporting events so had already fallen in love with the place when this opportunity came up.”

Wright says RTA’s rigorous approach taps into the demand for high-quality architecture in a region that is exploding with potential. “Young professionals who are moving here for that work/life balance are looking for something that meets their needs but we are also excited to be able to contribute to the commercial realm and to work with district councils to build great public spaces and craft a community legacy.”

Joll Road is the first project off the block for the freshly minted studio. Stage one of the four-stage development by Murrayfield Properties Ltd was constructed by Havelock North-based Gemco Construction and completed in October 2019. Occupying space within it made sense on a professional level but, Wright acknowledges, there’s also the upside of having retail and eateries on the doorstep. “There’s the coffee roastery, a Japanese bar and restaurant and Alessandros which, according to food critic Jesse Mulligan, serves New Zealand’s best pizza.”

In working up the master plan, RTA Studio employed a network of pedestrianised laneways to run between the buildings and make the experience more porous.  “We wanted to evolve and extend the high-street,” says Naish. “It’s a lively, activated zone that knits together the CBD with the residential neighbourhood on its fringe.”

The architects were also well aware that this would be the first three-storey structure in the locale and were determined to ensure it was contextually appropriate. A critical idea was to create ‘a village within a village’. Passers-by might be surprised to learn that stage one is made up of only two buildings. That’s because the forms are broken up into offset gables that not only shift in height from one to three storeys but featured cladding in different yet complementary colours. “This really helps to scale down the mass,” explains Naish.

The gables take their design cue from the barn but also key into the residential grain of nearby homes. Windows, some with deep reveals that Naish calls “applied eyebrows”, lend further modulation to the buildings and are positioned to frame views. “If you stand in one of the upstairs offices, you look out over the village to the rural landscape.”

The distinct forms are clad in long, slender terracotta tiles that reflect the colours of the diverse geology that has made the area such a thriving food-and-wine destination while a section that overlooks the courtyard is cloaked in weathered steel, a rusted façade to contrast the sleek tile.

Clusters of buildings create pockets for sheltered courtyards that are set well away from the street so that Joll Road becomes a precinct where locals can meet, do business and support the retail and hospitality outlets that occupy the ground-floor. This is architecture with a sense of place that enhances amenity for Havelock North’s residents and shapes a sense of community.  Judges of the Commercial Category at the 2020 NZIA award’s called it “a considered exercise in contextual design” and noted how successfully the development was integrated into the village.

Last year, RTA Studio marked their 20th-anniversary milestone with a public exhibition featuring miniature paper models of some of their most significant projects strung across an imaginary landscape. Setting up their first branch office marks an ambitious new phase. “RTA has always enjoyed working throughout New Zealand as it gives us the chance to engage in contextual architecture that responds to regional differences,” says Naish. His feeling is that while Hawke’s Bay has seen recent growth, its capacity is still under-played. “Once the world comes through the Covid-19 crisis, there is so much more potential to explore in business, and the tourism and food and wine industry. To play our part in that will be a privilege.”