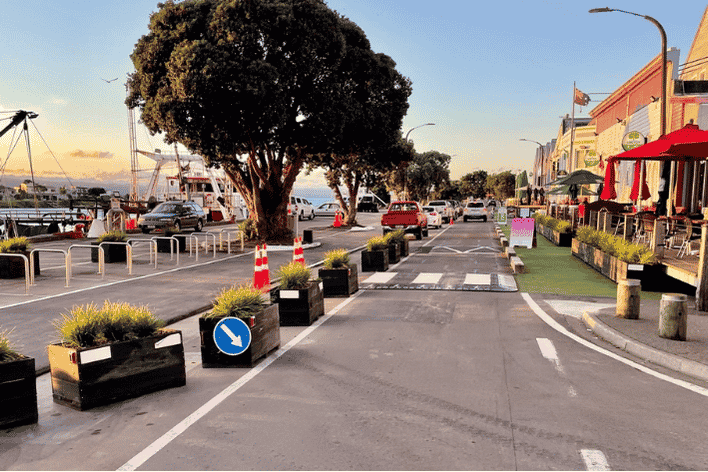 The streetscape and traffic calming pilot in Ahuriri’s West Quay precinct has earned Napier City Council an Agent for Change trophy. The award is for their outstanding contribution to transforming street spaces as part of a nation-wide push to create towns and cities in which people can move more freely.

The co-designed project in Ahuriri saw West Quay reworked to a one-way road, with footpaths, a dedicated cycle lane, planting to separate paths from outdoor dining areas, bike-stands and wheel-chair accessibility. The project was funded by Waka Kotahi NZTA through their Innovative Streets pilot.

Steph Kennard, NCC’s City Activation Lead, says the idea was to make the area more attractive and safer for residents and customers of local hospitality establishments, as well as providing easy access for vehicles servicing the working wharf.

“The pilot meant we could be flexible and try things out like flipping the cycleway onto the wharf side when it proved less effective in its original position,” Steph explains. “It gave us the chance to try out ideas from the community and measure their success before committing to a permanent change.”

The Innovating Streets for People programme developed by Waka Kotahi NZ Transport Agency provided support and funding to over 32 towns and cities to use tactical urbanism to quickly reshape their streets with temporary measures. These changes led to fewer cars, more people walking, biking and scooting, and safer and more accessible places to walk and cycle. Napier City Council is one of ten territorial councils around Aotearoa to be recognised by Waka Kotahi NZTA for its work.

Over the course of the two-month pilot, West Quay businesses enjoyed fewer cars and more space for people to relax in during the temporary transformation, so much so that they have asked the Council to leave the installation as it is rather than remove it as planned. Dennis Buckley, manager of Shed2 on the corner of West Quay and Lever St, speaks highly of the community-engagement process and says the project has been brilliant, despite losing customer car parks out front, which have been replaced with bike parks. “We have regained the view we came here for in 1986 – the outlook is a real X-factor. It’s been great for us.”

NCC is applying for funding for future projects under Waka Kotahi’s Streets for People Programme 2021-2024.

For more information on the Innovating Streets and Streets for People programmes, see https://nzta.govt.nz/roads-and-rail/streets-for-people/