Duke and Duchess Of Sussex At Redwoods Treewalk 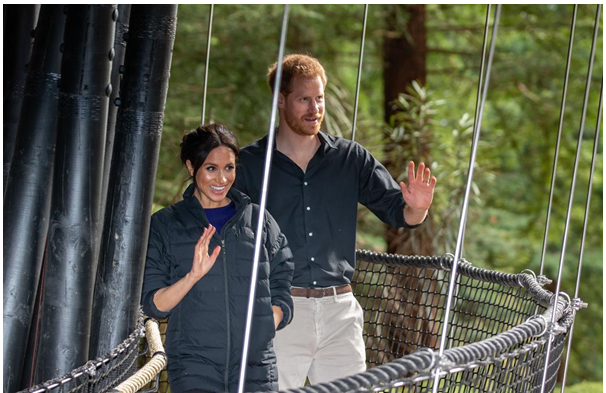 The Duke and Duchess of Sussex Harry and Meghan travelled to New Zealand as part of their 2018 Royal Tour. They visited iconic experiences throughout New Zealand that reflected their interest and passion for culture and the environment. One of these locations was Rotorua, where they spent an afternoon in the Redwoods forest and experienced first-hand the Redwoods Treewalk which included walking up the newly opened spiral ramp and viewing the award-winning tree lanterns (both designed by David Trubridge Ltd from Hawke’s Bay). The Redwoods Treewalk is a 700-m walkway, that consists of a series of 28 suspension bridges traversing the gaps between 27 majestic 117-year-old Redwood trees. In 2015 David Trubridge Ltd was tasked with designing a night experience involving hanging lights in the forest. The company designed and manufactured 30 large hanging lights amongst the trees.’ Speaking about the project David Trubridge says: “I’ve never been so constantly rewarded by a project, I often hear how transformative the experience is for people. They say they were moved spiritually, and/or recharged with a new energy”. The teams from Treewalk and David Trubridge feel very honoured that the royal couple selected the forest and Treewalk as an experience to visit during their short stay in NZ. “It was a pleasure and honour to share our special place with them”; says Bruce Thomasen – Co-founder of Redwoods Treewalk, “they were both very interested in the forest story, the Trubridge design elements and the unique conservation story that we are able to tell.” The Duke and Duchess also enjoyed quiet time within the Redwoods forest and his parting comment was “Bye guys, enjoy this heaven.” As a happy coincidence, the Treewalk was also visited on the same day by journalist Jada Yuan who is touring the world as part of the New York Times ‘52 best places to visit’ tour in which the Treewalk Nightlights (and Rotorua) is included. Photo Credit: Alan Ofsoski Posted: 17 November 2018